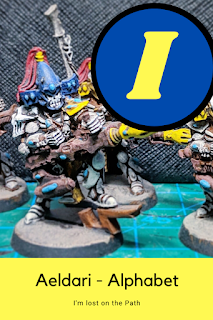 My Eldar Encyclopedia is becoming a bit bloated and over complicated so I am attempting to fix this. Starting with the A-Z of Aeldari words I have over there. Whenever I have the urge I will post a section of that page, create a link to this page and see if it tidies up the page and makes me feel happy once more
I
"We are like echoes in a cave, or waves upon the water: performing our part every time we are called. We who have glimpsed into the flow of time see that it is exactly such vast confluence, paths crossed and re-crossed. All are swept along. And we Eldar, masters of hindsight, insight, and foresight are bound that much more tightly to our duty than the ignorant, the belligerent, the blind.
When one truly understands fate as it is, myriad branching paths, then one can truly see that duty is cleaving to a particular fate, and glory is the accomplishment of duty’s ends. When we are true to the nature of the Eldar, we cannot fail." - Farseer Caerys of Ulthwé
i-: Long / great / big
Iad: Casting out
Iadanna: Eldar Pirates
Iall: Sending
Iam: I
-ian: Heavenly / Religious
Iarr, Iaer: Questing
Iarstill: Sword
-ibb: Physicality / Mundane
Id: Throwing
Idain: Farseer
Iem: We
Ifeth: Void
Ifiath: Obscurity
Ifieth: Darkness
Ika: Glorious / Marvellous / Impressive
Ill-: No longer
IllMureead: Tyranids
Illrun: City
Imuluan: A Combat Art form.
-iok: Hellish / Underworld
Iolox: Term given to the 4th day of the week. Note there is only 6 days in the Eldar week.
Ish-: Opposite of
Isha: The Eldar Goddess of both creation and the harvest, who created the Eldar race and who loved her people without question.
Ishar: Mother
Ishill: Still
Istau/Istu: Quiet
Istaur: Silent
Istrill: Decision
Istu-Karun: Eldar Scouts
Isturrath: Miming
Isturriath: Choking
Isturrith: Whispering
ituelean: Shuriken Cannon
Iyalith: Jump
Original Materials
This is a project that has been worked on for a while and mainly for my own needs so I never thought of recording page numbers etc. as I never thought it would leave my notebook but for those interested, it has been collected from the following locations:
Rogue Trader (1987), Warhammer 2nd/3rd/4th/5th Editions, Eldar codex (2nd ed/3rd ed/4th ed), Codex Dark Eldar, Citadel Journal #17, White Dwarf #127 (original Eldar army list), Codex: Titanicus, Codex Necrons, Warhammer 40,000 compendium, Warhammer 40k Wargear (2nd ed). Battletome Sylvaneth. Battletome Daughters of Khaine. Battletome Idoneth Deepkin.
Black Library Novels: Shadow Point, Harlequin, Chaos Child, Farseer, Tales from the Dark Millennium, Warrior Coven, Path of the Warrior, Path of the Seer, Eldar Prophecy, Valedor, Asurmen, Jain Zar, Rise of Ynnead: Ghost Warrior, Rise of Ynnead: Wildrider.
**Also there is this web version of an Eldar dictionary that turns out has been around since 1990. It's more complete than what I have collected and better organized. This link was requested to be added by David Grophland: Eldar Language
Posted by Adventures with Peps at July 11, 2020