It won't come as a surprise that my projects are always so slow-moving forwards and something like my Dan Abnett Block is no different! Last/first update was way back in January (Link) 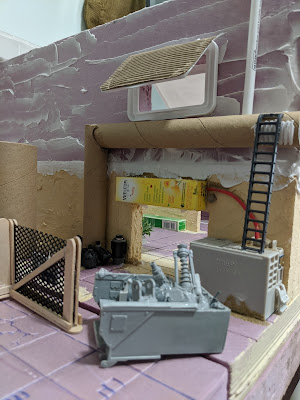 Well, the block is moving forwards and as it grows I am hoping so will my posting about it. I have currently tiled the flooring and built out a lot of the main areas.
This is the right-hand entrance, with the beginning of some detailing. The idea is that the yellow boxed area will be some kind of shop signage - With hopefully a neon effect happening. The grey block next to it is some kind of power source and I want to have a lot more cabling coming off it, as well as a fan/cooling system. The cardboard tubes are most likely part of a cooling system and I added the ladder as a cheeky way to reach that window which I plan on having smashed glass in it.
The window is actually framed by using a baby wipes dispenser lid. I have one on each side and have used corrugated cardboard to cover the lids. I plan on setting up two more windows on this side alone. I'm hoping once painted and sealed the locking mechanism will still work as it would make for a cool in-game feature. Imagine a gunman sneaking up the ladder, popping the window, taking the shot, then shutting the window to get cover and escape!
A future post will show off the interior but you can start to see the inside taking shape. I have made a terminal station of sorts added where benches will exist and got the start of the fountain in place.
I've also started work on the second 2' by 2' board which I want to be a bit more open with some shop pods on it, which are coming via Warlord Games and will also feature a classic chem pit for dumping bodies into :)
Some inspirational piece to help inspire my builds. 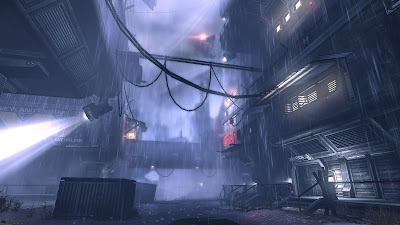 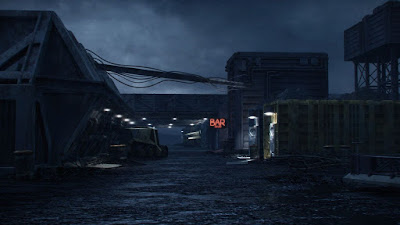