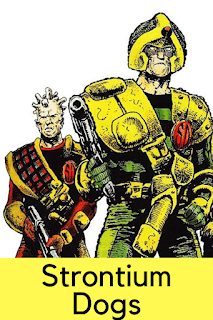 It's finally happening I am painting some of my Strontium Dog figures. The first was the Gronk and now I move onto Brute Mosely the bright blue mutant. 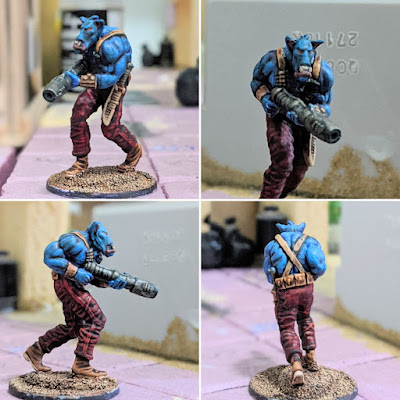 Character
The big blue mutant was a member of the criminal gang led by Max Bubba and assisted him in his attempt to destroy human history by going back in time to the Viking era and killing people. His murderous ways eventually caught up with him, but not before he had been complicit in the murder of time-displaced Wulf Sternhammer, earning him the undying enmity of Wulf's friend, Strontium Dog Johnny Alpha, with predictably fatal consequences. He was crushed in a rockfall and abandoned by Bubba and Impetigo Jones as they tried to flee Alpha. Alpha later found Mosely crushed underneath the fallen rock and begging for help. Alpha ignored Mosely's pleas and left him to die. It's later revealed that he bled to death.
Powers and abilities
Abilities: Killing people.
Strength level: Superhuman.
Weaknesses: Rocks.
Paraphernalia: Time machine; skimmer.
Weapons: Guns.
Notes: Brute Mosely may or may not be a descendant of the notorious British fascist and Nazi sympathizer Oswald Mosely. Never explained in the comics but they had a habit of basing characters on real-life people.
This was a weird model to paint especially as I originally tried to go blue and black, but it was way too dark so I brighten the model using red on the trousers. At some point, I want to do another highlight on the blue to pick up some final details and I also want to pick out the leg linings in a pale cream colour, before finally completing the base in grey to match my upcoming city boards.
Posted by Adventures with Peps at June 15, 2020