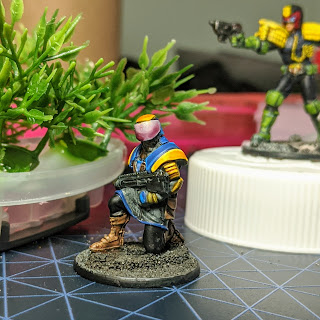 When I re-started my Judge Dredd gaming collection, I knew I had to dust off my Sector 102 project. My ambition with this project was to create my own section of MC-1 and call it home. I wanted to create a city block to set most of my adventures in and like most MC-1 blocks it needed a strong name to theme the block around. Here entered Dan Abnett, as my favourite Black Library Author and comic writer (love Sinister Dexter) I knew I had an amazing back catalogue of work to draw inspiration from.
One of the big inspirations is, of course, the Gaunt's Ghost series. So when coming up with an idea for the Citi-Def I knew I had to turn to this series. Now the obvious pairing would be the Ghosts themselves but they feel too elite and too lucky to act like a bumbling foolish Mega-City Citi-Def squad, so I moved onto the Royal Volpone for inspiration. For those who haven't read Gaunt's Ghosts, the 50th Volpone was an elite fighting force known as the Bluebloods. Extremely proud and arrogant they disliked the Ghosts no end and attempted to do everything to undermine them, ultimately leading to their disgrace and downfall.
So here we are in Sector 102 and Dan Abnett Block defended by the Bluebloods. For my tester miniature, I used a standard line trooper and blocked in the colours of yellow, blue and grey. Looking at the model I knew I needed a pop more colour to give it that comic book look, so I opted for a purple visor. I am pleased with the result and will be moving forwards with this scheme.
I view this Citi-Def squad as a group of wannabe soldiers. Their leader who will be called Sturm is an arrogant man who discovered an illegal paper copy of Ghostmaker and decided to base his squad around the Sturm in the novel. He promotes pride and arrogance in his men and prefers grandeur or skill and mostly leads his men around on parades and hosting parties rather than doing real training.
Here is trooper one is now forevermore known as Danzer.
Trooper Danzer
Weapons: Spit Carbine
Armour: Ballistic Shell Armour
Let me know what you think by dropping me comment below and if you have a moment please do become a follower it would mean a lot.
Posted by Adventures with Peps at June 01, 2020