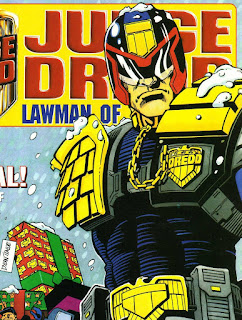 Well, I'm on a bit of a roll so I'm just going to run with it and see how far we go! There is something about this version of Dredd that I just find childlike and enjoyable to read. I honestly hope you are also enjoying the read-along? I only have 23 issues which means we are half the way through, which is great and sad all at the same time. But less chat and more Dredd.
Welcome to issue 12 the Xmas issue. As always we have a Part 2 story - In Cold Blood and two new stories the first Jimping and the second Umpty Bagging. 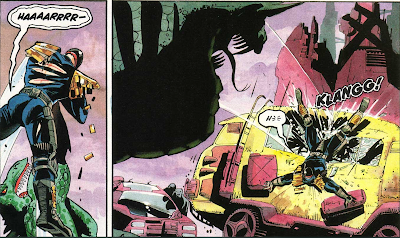 In Cold Blood (Part Two)
So the last issue left us with Dredd facing down the terrifying Coldblood in Mutie town and we pick straight back into the action. It's one of the rare occasions when we get to watch Dredd getting his ass kicked and boy is it a true beating. Dredd is only saved when Coldblood lashes out at one of his own and realizes how low he has sunk. Coldblood vows vengeance on Lucis Bludd and stalks off into the darkness of Mega-City One.
Great way to end as we now seemingly have a three-way face off setting up of Lucius, Coldblood and Dredd. There were some great looking muties in this issue as well, especially the restaurant owner.
Then similar to Lucius in the last issue we have the Coldblood fact file. 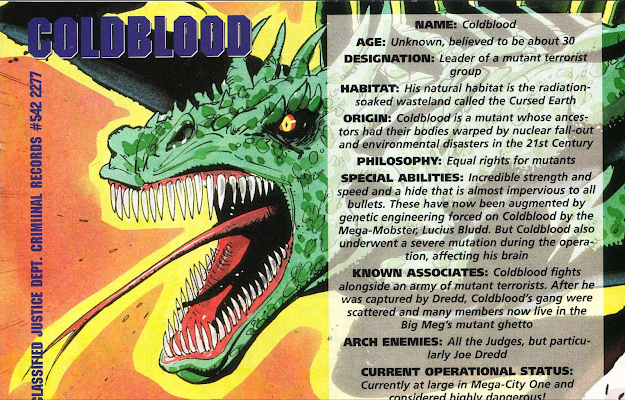 Bludd Feud (Part Two)
The mini newspaper-style comic continues. The Grudd Father Lucius Bludd has offered a Million Credits to the person who can kill Judge Dredd, which means every psycho in the city is gunning for our favourite Judge. To make matters worst Mean Machine has escaped the local Iso-cubes and is hunting the lawman. In a straight fight, it seems like Judge Dredd is going to be bested but is ultimately aided by his bike and is able to apprehend Mean Machine and take him back to the cubes.
We are then treated (if that is the right word) to a scene by scene breakdown of the 1995 movie, which for our reading pleasure is broken down into two parts (heavy eye-rolling), I feel it is time to swiftly move on.
Umpty bagging
So I'm pretty sure this is a retelling of a classic JD arc told in 2000 AD. Bit of a background check and for sure it is. It's just rebranded to fit this version of JD and given a little facelift. It was a good story originally and is still good in this version. It deals with the illegal sales of sugar dosed candy and product that is banned in MC-1 and shows how it is now sold like high-grade drugs, with specialist rehab centres built to deal with the sugar-addicted. It also hints to a Mega Mob informer working inside the Justice Department... It seems like another tale that is building up to a showdown. I just hope there are enough issues in the series to build it out properly.

Jimping
Jimping a Mega-City One term for crazies who dress up and act like an MC-1 Judge. Classified a crime these Jimps can cause a lot of trouble in a short space of time as we are about to discover. Following a routine patrol, JD spots a Judges Crime Blitz happening - but this is Dredd's patch, so why wasn't he informed? Also, why doesn't he recognize them? Soon a gunfight breaks out and JD guns the criminal gang down, evening bagging himself a prisoner. It seems all three stories are linked to Mega Rackets and Lucius Bludd, better yet it would seem the next issue is the official showdown I am waiting for!
Final Thoughts: A seriously well thought out issue, loving the fact that all the stories are actually focused on one topic the Mega Rackets and Lucius Bludd. I am excited to get reading the issue. Drop me a comment and let me know your thoughts. Thanks for stopping by!
Posted by Adventures with Peps at June 23, 2020