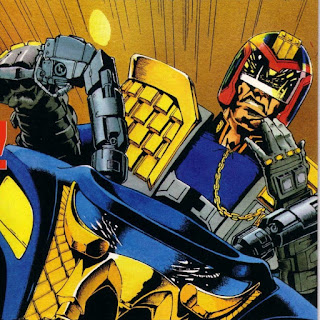 Wow, I let this one slip, last time I wrote a post about this series was back in September 2019. So give yourselves a refresher and re-read issue 10 (Link). As always I will start with the cover. It's pretty dull, to be honest with Dredd riding a Lawmaster and cheap straight lines to represent movement.
The stories in this issue are as follows: Part 2 of Perp Running, all-new Ninja and what I assume is the two-parter In Cold Blood. We seem to be starting with the new two-parter In Cold Blood!
In Cold Blood (Part One)
ISO-Block 117 home to a lot of hardened criminals including the Cursed Earth Mutant Coldblood. A mind-controlled warden is activated and releases all the prisoners causing a mass riot. Of course, Dredd leads the counter charge and brings about law and order but where is Coldblood? Turns out Coldblood is in space getting an upgrade with the help of Lucius Bludd. I'm excited to discover more about Lucius and how Coldblood is now more reptile than mutant.
- Almost in answer to my comment above I now get the answers to who is Lucius Bludd.
Alias: The Grudfather Age: Unknown between 40 and 60. Designation: Crime Lord - Ultimate boss of the Mega-City Mobs. Habitat: A Satellite above the world. It seems like they are building him up to be the big villain in the series. I seriously hope he can live up to the hype.
Bludd Feud!
An all-new mini-series featuring a back and forth between Bludd and Dredd. For this one Dredd tracks down a sugar smuggling ring and captures a high ranking crime member. Taking the creep down to PSI central he gets the perp's mind read and discovers Bludd has hired hitmen to take him out. Not a bad start to this new series and could be a fun read. 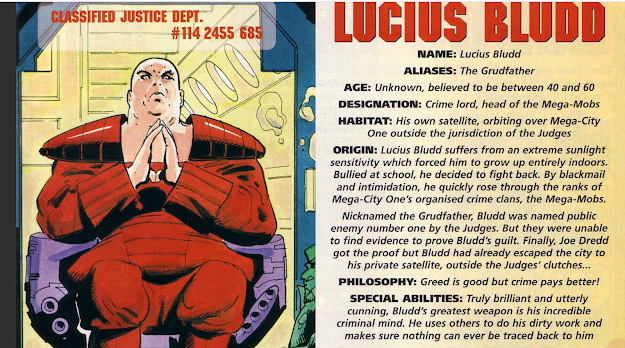 Then we get a cool one-page Citi-Block image showcasing all the locations in a block this is a really cool image. I normally would share here but I am going to use this image to start designing a full Dan Abnett Block so expect to see this image in the very near future.
Perp Running (Part Two)
Set on Paradise Island in the Black Atlantic, it is a haven for criminal activity all under the watchful eye of Dicky Demarco. After getting a lead Judge Dredd takes a team to the Island to investigate. It doesn't take long to discover the truth, and soon Dredd is casing Demarco through the aquarium. Sadly Demarco isn't the smartest cookie and fires a gun destroying the Kraken's tank and getting himself eaten. As the Judges team starts discovering the bodies they find files on the face changed villains. The comic ends with Dredd declaring that Paradise Island will be Mega-City Ones newest ISO-Cube.
Ninja
Following a raid on a Hondo-City gang sugar transport, a Mega-City One Gang prematurely celebrate. This is their first and last mistake as they are ambushed by Yakuza Ninja! These Ninja's are over the top equipped with some Hondo high tech gear - Holo-Projectors to mask location and numbers, Heat Seeking Laser Shuriken, Electro-knux, the ability to commit self disintegration if captured and finally they are all clones! Dredd manages in classic Judge Dredd style to take down these dangerous ninjas, earning himself the number one title o Hondo City's criminal hitlist and the enmity of Lord Itaki - Head of the Hondo Crime Families.

And with that we reach the end of what is possibly the best issue of Lawman of the Future so far. Coldblood with Lucius definitely is exciting new prospect, Perp Running ended Strong and Ninja is starting something seriously cool and the artwork was great. I am excited to see if this is a turning point for the comic and if we will be treated to some great stories that can truly compete with 2000 AD.
Posted by Adventures with Peps at June 17, 2020