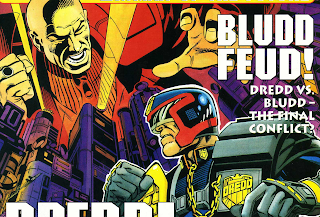 Here we on issue 13 and would seem the title fight of Dredd vs Bludd is coming to ahead! The cover is dominated by an image of Bludd lording it over Mega-City One with Dredd on the defensive. It's a weird image as the figure of Bludd doesn't look like any other version I have seen in the comic so far. I feel the cover artist was given a bit to much freedom with the creation of the image. But hey let us dive on in. 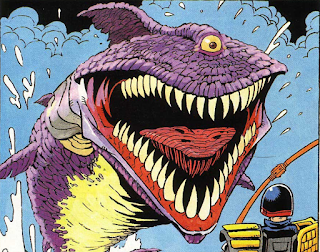 Survival Part Two
A black alien goo, hitching a ride on a meteor crash lands on Earth during the age of dinosaurs. Fortunately for the dinosaurs, the same meteor causes the ice age and the black goo is frozen away imprisoned in ice. That is until MC-1 picks up a chunk believing it to be oil. As they transport it back to MC-1 wrapped in ice, the black goo manages to escape and infects the Judges onboard (all except Dredd and D'Angelo). Following a brief fight, the ship's shields are disabled and the craft is left open to attack by the local Manta Sharks a mutant breed of Black Atlantic life. A great opening tale with some weird-ass animals involved. This is going to be a fun two-parter, I am also glad it is not Bludd related.
Bludd Feud
Continuing the mini strip from the last two issues this story picks from the Mean Machine arc, with Dredd dropping of Mean at ISO-666. Having finally had enough of all the attempted hits on his life Dredd tracks down Red and discovers for sure that Bludd is behind the assassination attempts. The short story ends with Dredd announcing "I'm coming for you Bludd" - I believe the final story continues the Bludd tales. It's really a filler piece to just move the story along, so we will move on to.
Mob Hit
Judge Dredd has taken an informant in following a Jimping arrest. This informant turns up to have a lot of information on the Grudfather and is moved to a high-security hospital to recover from injuries. Unfortunately for Dredd, there are two things that will ruin his day - 1) There is a mole within the Justice Department 2) The Gila-Munja are coming to assassinate the informant. The Gila-Munja are Cursed Earth Mutants who resemble lizards but man-sized, their claws drip with deadly poison and they can become almost invisible thanks to naturally occurring camo abilities. As Dredd and the team hold of the Gila-Munja, the Justice Department Mole strikes killing the informant. Finally, the mole is revealed to be none other than Judge Markley - who leads the task force against the Mega Rackets. Following a quick fight, Judge Dredd secures a new informant in the form of Markley.
Another great step in the Bludd story arc, only one more tale to go! Loved seeing the Gila-Munja in this story, they are a great part of Dredd lore and I feel they do them great justice in this tale. As we see them take down a lot of Judges and showcase a lot of their abilities. 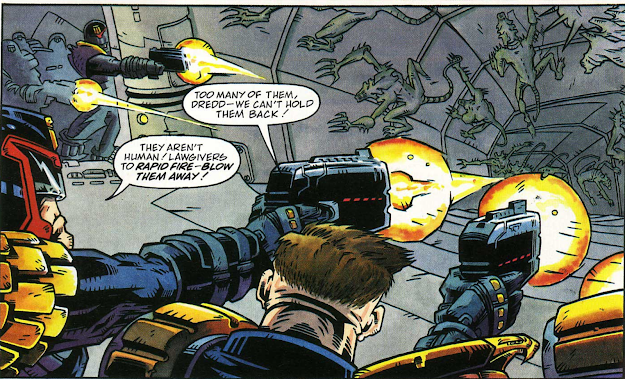 Grudfather
With Markley in custody, it's finally time to start shutting down the Mega-Mob businesses. With Judge Dredd leading the task force, soon a lot of the major crimes throughout MC-1 are shutdown. Including Umpty Candy and Organ Legging. With the war on Major Crime under way Dredd hops onboard Justice One and heads into Neutral Space to meet Bludd face to face. But being outside of MC-1 jurisdiction Dredd is powerless to do anything and just exchanges words with Bludd, who announces that Dredd has achieved nothing and that in a month's time crime will be back to normal. A bit of a weak ending to this arc of the story, I have the feeling this isn't the end but it is also not the exciting story I was hoping for.
And with that, we reach the end of issue 13. A fun ride for sure but a little disappointing too. Drop me your comments and let me know your thoughts. To be kept informed on more post be sure to subscribe above.
Posted by Adventures with Peps at June 30, 2020