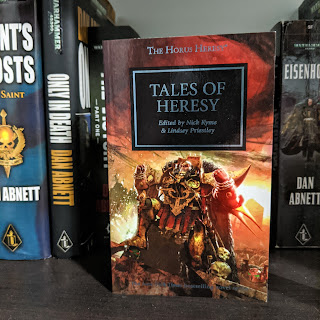 Last month I jumped forward by a few months to assist in my Thousand Sons month but it is now time to head back into the correct order of the Horus Heresy. This is the first collected short stories in the series and I am excited to dive in.
Book Details
Title: Tales of Heresy
Author: Multiple Authors
Publisher: Black Library
Type: Paperback
Page Count: 416
Commercial Fluff: When Horus the Warmaster rebelled against the Emperor, the ensuing civil war nearly destroyed the Imperium. War raged across the galaxy, pitting Astartes against their battle-brothers in a struggle where death was the only victor.
Contents:
Dan Abnett - Blood Games
Matt Farrer - After Desh’ea
Mike Lee - Wolf at the Door
Graham McNeill - The Last Church
James Swallow - The Voice
Anthony Reynolds - Scions of the Storm
Gav Thorpe - Call of the Lion
Review
Great read and plenty to talk about so let us go one story at the time. 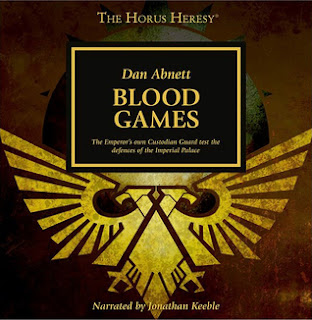 Blood Games - Dan Abnett - Amongst the sprawling hives of Terra, Amon Tauromachian of the Emperor's Custodians plays a deadly game as he investigates rumours of treason on humanity's homeworld.
Amon Tauromachian, one of the Emperor’s elite Custodian Guard, returns to the Imperial Palace after a year on one of the Blood Games by which these exalted heroes train. Tasked with a new mission, he is sent to the hives of Hy Brasil to check on the loyalty of a notorious troublemaker. With the galaxy at war and half the Imperium’s armies in rebellion, any hint of heresy on the Throneworld must be stamped out. Amon’s mission draws him into a web of deceit and betrayal, where no one can be trusted and nothing is at it seems. Can he unravel the truth and secure Terra for the Emperor?
It's an in-depth look at Terra itself, and how treachery lurked at the Imperium's heart even as the Heresy began. There's also a fantastic, action-packed look at what the Custodians do when they're not out fighting.
A great way to open the book. We follow a Custodes character as he partakes in a Blood Game. The goal is to infiltrate the Imperial Palace and to see how far they can get before being caught, the aim to discover weaknesses in the Fortress's defences. Great intro to Terra and the Custodes as well as a hive Hy Brasil. So much twists and turns it's impossible not to enjoy. 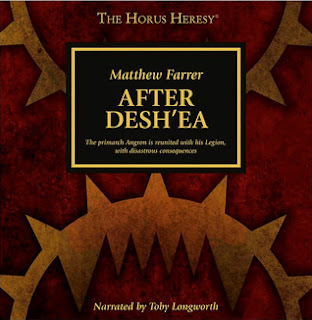 After Desh'ea - Matt Farrer - The War Hounds Legion have been reunited with their primarch. It is a time for rejoicing... isn't it? The masters of the Legion gather to discuss their new master, while the primarch, Angron, lurks in the darkness. Can Khârn unite master and servants?
With the discovery of the lost primarch Angron came violence and confusion, and what should have been the defining moment of the War Hounds Legion instead became a humbling embarrassment. As their senior officers fall one by one to the rage of the newly freed gladiator-king, it seems that they are doomed – perhaps their last chance for redemption comes in the form of the Eighth Captain, Khârn. Will this calm and level-headed warrior be able to lead his father into the Emperor’s light, or will he join the rest of his Legion in death?
The World Eaters make a lot more sense after listening to this tale of the first meeting between the Legion and its primarch. And of all their commanders, only Khârn has what it takes to calm the maddened Angron... a marked contrast from the defining image of the Betrayer.
Been a fan of the World Eaters for a while and this for me is their first real story just about them (not sharing page time with Word Bearers). It's dark, moody and depressing. We have a newly found Primarch suffering from the grief of being torn away from his world, leaving his friends to die alone. Add into this the mixture of the nails and soon the blood is following. Always hard to follow Abnett but I really enjoyed this as it gave us a really good insight into this troubled legion. 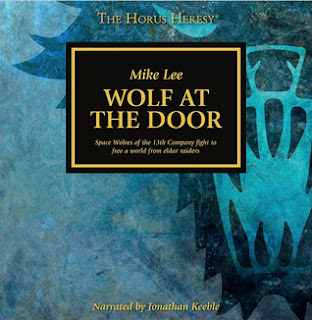 Wolf at the Door - Mike Lee - The Thirteenth Company of the Space Wolves defend an Imperial world from vile alien raiders, but as the war drags on, the beast within each of Russ' brothers threatens to overwhelm them...
The Space Wolves of the VIth Legion are among the most fierce and dedicated of the Legiones Astartes, bringing the Emperor’s wrath against the many enemies of mankind. As part of the 954th Expedition, Wolf Lord Bulveye’s warriors of the 13th Company come across a world previously shrouded by warp storms and cut off from the rest of the Imperium – when it becomes apparent that the human population is being raided by mysterious Xenos known as ‘the Harrowers’, the Space Wolves are duty-bound to intervene.
It looks at the Space Wolves from a whole new angle, showing the ones who should never have been able to join the Legion, and the consequences of what they went through...
Nice to see Mike Lee made it into this book, I enjoyed his work on Malus Darkblade so I was intrigued to read some of his sci-fi. The Wolf Lord Russ is marshalling his forces before heading to Prospero (and we know what happens there), as The 13th company makes haste to join their lord their scanners discover a world that has not been found before due to warp storms and move to investigate. Here they discover a lost arc of the human race, but aliens known as the Harrowers (aka Dark Eldar) come to harvest them every few years and it seems it is coming up to harvest time once again. Of course, the Space Wolves stay to fight the Xenos! A fun and gripping story really enjoyable. 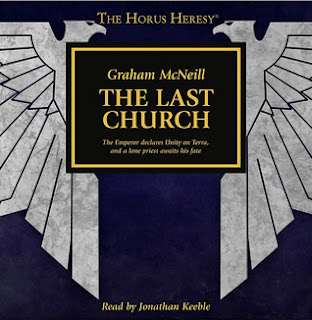 The Last Church - Graham McNeill - As the unification of Terra draws to a close, the priest of the world's last church plays host to a visitor who questions his every belief. Who is the stranger, and what does his visit portend?
Terra stands upon the brink of Unity. The armies of the self-proclaimed Emperor of Mankind have waged their bloody wars to bring the whole planet under his rule, crushing all traces of outlawed religion and worship from the face of this now secular utopia. But even the mighty Thunder Warriors cannot cow Uriah Olathaire, last priest of the Church of the Lightning Stone, as he goes about his empty, hollow rituals – and only one last and thoroughly unexpected visitor can bring any hope of a possible reconciliation.
It's a story like no other, as the custodian of Terra's last place of worship comes face to face with a being who challenges his every belief... and has the power to back up his own.
Here we have the classic matchup of a logical mind versus one of faith. The setting is in the last existing Church on Terra. Inside is Uriah continuing his religious tasks whilst overlooked by the terrifying Thunder Warriors. This priest is soon joined by the other main character and soon the priest is the centre of criticism from this character as he tries to pick holes in the old man's beliefs.
It's a one-sided argument that is disappointing I would have loved the priest to fight back more. But all things considered, it is a solid read. The Voice - James Swallow - When a Black Ship full of captured psykers goes awry, the Sisters of Silence board it to discover what happened. But a mysterious voice threatens to destroy them.
The Black Ships are a mysterious and fearful sight – unmarked vessels that scour the distant reaches of the galaxy, ever watchful for latent psykers and witchbreeds for the monolithic Astra Telepathica. When one such ship, the Validus, is found drifting unpowered in the nightmare realm of the warp, it falls to the Sisters of Silence to uncover the reason behind it. As pariahs capable of blocking even the most potent psychic energy, Amendera Kendel and young Leilani Mollitas ready themselves for the worst…
I a bit of a precursor for the Warhammer horror series I feel. We are drawn into the haunted ship Validus as a squad of Sisters of Silence board to discover what happened on the ship and where is the sister who rode aboard this ship. Not the most exciting tale in the book but still hugely enjoyable. 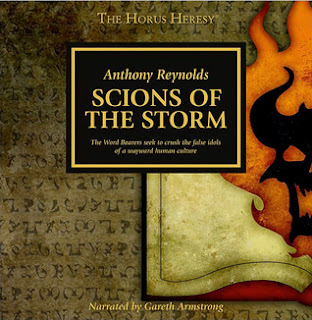 Scions of the Storm - Anthony Reynolds -  The Word Bearers encounter a planet where worship of the Dark Gods echoes their own nascent beliefs. Will they purge this world or embrace its darkness?
Shortly after the shameful events of Monarchia, the Word Bearers Legion have begun to prosecute the Great Crusade with a previously unseen level of zealotry and aggression. The world of Forty-Seven Sixteen falls into their sights, a world where the human populace worship graven idols in their heathen rights, and yet plead to be integrated into the wider Imperium. Captain Sor Talgron of the 34th Company stands ready to serve his primarch – but does the Legion have more in common with the people of Forty-Seven Sixteen than they realise?
Another step in the Word Bearers' fall to darkness is revealed, along with some of the foul deeds they committed to get the attention of the Chaos gods.
Monarchia was destroyed, Lorgar humbled and shamed for his works of worship to the Emperor. Since that day Lorgar has hidden from sight but as the compliance of Forty-Seven Sixteen begins Lorgar is reawakened and joins the fray. The people of this world use intelligent but deadly robots to fight their wars and this is an act the warriors of the Emperors can't ignore. As the fighting comes to a conclusion Sor Talgron discovers that the people are actually worshipping the Emperor and that they have made a terrible mistake. As he requests the battle to stop the higher-ranked leaders override his orders and forces the Word Bearers to slaughter the population, before allowing Lorgar to show him the away of Chaos. 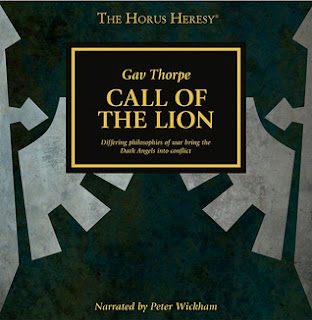 Call of the Lion - Gav Thorpe - The Terran and Calibanite commanders of the Dark Angels clash for the first time as the Great Crusade brings them to the world of Byzanthis.
The Dark Angels Legion is couched in layers of mystery and secrecy, harkening back to the days of the knightly orders of Caliban that helped to raise their infant primarch. But Lion El’Jonson’s greatest strength often proves to be one of the most divisive issues amongst his sons – rarely can any two commanders agree upon one single course of action from the start. As they seek to bring the world of Byzanthis to compliance, Chapter Masters Astelan and Belath are among those with very different notions of what victory might require.
The Dark Angels are barely into the Crusade but are already starting to show issues. Differing backgrounded leaders (one Terran and one Caliban) clash over how best to bring a planet into knees. Astelan believes peaceful means will win the day whilst Belath wants to use their military strength to bring the world to its knees. But I already know these too will clash and meet again a few more times.
Great short story anthology and it was good to get into a few other legions for a change. But I have to be honest I am ready for a longer tale to sink my teeth into.
Labels: Black Legion Horus Heresy Imperium Lion El'Johnson