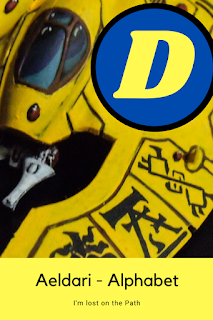 My Eldar Encyclopedia is becoming a bit bloated and over complicated so I am attempting to fix this. Starting with the A-Z of Aeldari words I have over there. Whenever I have the urge I will post a section of that page, create a link to this page and see if it tidies up the page and makes me feel happy once more.
"Every moment of anger, hate, deceit, pain, suffering, pleasure, and desire is mirrored in the power of Chaos. When its legions march, they march to return upon us a ruin that is of our own making." - Arenal, Farseer.
Da: if
Dathedian: Cicatrix Maledictum/the Great Rift.
Dakair: there or being in another place
Dakar: there or being in another place
Daras: Nine
Darhathin: Leg
Dark: ot
Dath: Between
Dathedi: Between colours and relates to the holo-suit worn by Harlequins but also has implications upon the Eldar vehicle upgrade, the holo-field
Deash: Door
Deh: Five
Deikar: There or being in another place
​​Deshial: Gap
Desthrin: Exit
Destra: Entrance
Dieleir: Somersault
Din: Protecting
Dinne: Protecting
Distau: Mocking
Distaur: Harlequin unit Mime
Disthir: Knuckle
Domanith: Stomach
Dorch: Unseen
Dorcha: Dark
Dorchain: Invisible
Draoch-var: A great drake from myth slew by Ulthanash with the Spear of Twilight.
Dras: Shadow or Concealment
Drethuchii: Shattering of Harmony
Dris: Shadow or Concealment
Drukhari: Dark Eldar
Dyann: Protecting
Original Materials
This is a project that has been worked on for a while and mainly for my own needs so I never thought of recording page numbers etc. as I never thought it would leave my notebook but for those interested, it has been collected from the following locations:
Rogue Trader (1987), Warhammer 2nd/3rd/4th/5th Editions, Eldar codex (2nd ed/3rd ed/4th ed), Codex Dark Eldar, Citadel Journal #17, White Dwarf #127 (original Eldar army list), Codex: Titanicus, Codex Necrons, Warhammer 40,000 compendium, Warhammer 40k Wargear (2nd ed). Battletome Sylvaneth. Battletome Daughters of Khaine. Battletome Idoneth Deepkin.
Black Library Novels: Shadow Point, Harlequin, Chaos Child, Farseer, Tales from the Dark Millennium, Warrior Coven, Path of the Warrior, Path of the Seer, Eldar Prophecy, Valedor, Asurmen, Jain Zar, Rise of Ynnead: Ghost Warrior, Rise of Ynnead: Wildrider.
**Also there is this web version of an Eldar dictionary that turns out has been around since 1990. It's more complete than what I have collected and better organized. This link was requested to be added by David Grophland: Eldar Language.
Posted by Adventures with Peps at June 11, 2020