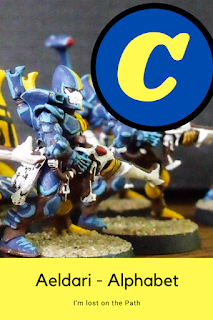 My Eldar Encyclopedia is becoming a bit bloated and over complicated so I am attempting to fix this. Starting with the A-Z of Aeldari words I have over there. Whenever I have the urge I will post a section of that page, create a link to this page and see if it tidies up the page and makes me feel happy once more.
"Only when you have soared through the morning skies on wings of flame can you understand the Hawk. Only when you have fallen screaming upon those who know they are already dead can you understand the Banshee. Only when you have annihilated those who would oppose you can you truly understand the power of the Dragon. And only one who has travelled but ultimately turned away from each of these paths can understand the Autarch." - Anthrillien Morningchild, Autarch of Yme-Loc
​​
C
Ca: One
Cae: God or Godlike
Cait: Punishing
Camion: Revenging
Carrec: Soul
Carrecenad: Soulstone
Carreciann: Wraithguard
Catu: First
Catumen: Ambassador
Caur-: Huge, Giant or Indescribable
Caurifelliann: Giant striding warrior literally means Titan.
Caurmenli: Thumb
Ce: God or Godlike
Ceo: God Godlike
Cera: Greetings or Welcoming
Cerka: Greetings or Welcoming
Cerkish: Greetings or Welcoming
Cheapamir: Think
Cheapmai: Plan
Cheapon: Suppose
Cherakan: Seduction
Cherakinan: Romance
Cherital: Love
Chom: Totality
Choma: Extremely
Chomh: Very
Cre-: Small, Little or Diminutive
CreDeas: Gate
Creidann: The name given to the Harlequin pack grenade launcher, but means 'belief-maker.'
Cresistauead: Human
Original Materials
This is a project that has been worked on for a while and mainly for my own needs so I never thought of recording page numbers etc. as I never thought it would leave my notebook but for those interested, it has been collected from the following locations:
Rogue Trader (1987), Warhammer 2nd/3rd/4th/5th Editions, Eldar codex (2nd ed/3rd ed/4th ed), Codex Dark Eldar, Citadel Journal #17, White Dwarf #127 (original Eldar army list), Codex: Titanicus, Codex Necrons, Warhammer 40,000 compendium, Warhammer 40k Wargear (2nd ed). Battletome Sylvaneth. Battletome Daughters of Khaine. Battletome Idoneth Deepkin.
Black Library Novels: Shadow Point, Harlequin, Chaos Child, Farseer, Tales from the Dark Millennium, Warrior Coven, Path of the Warrior, Path of the Seer, Eldar Prophecy, Valedor, Asurmen, Jain Zar, Rise of Ynnead: Ghost Warrior, Rise of Ynnead: Wildrider.
**Also there is this web version of an Eldar dictionary that turns out has been around since 1990. It's more complete than what I have collected and better organized. This link was requested to be added by David Grophland: Eldar Language.
Posted by Adventures with Peps at June 06, 2020