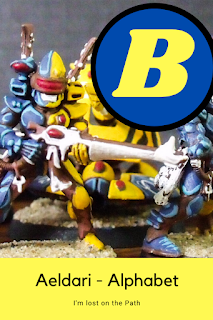 My Eldar Encyclopedia is becoming a bit bloated and over complicated so I am attempting to fix this. Starting with the A-Z of Aeldari words I have over there. Whenever I have the urge I will post a section of that page, create a link to this page and see if it tidies up the page and makes me feel happy once more.
"Let not fear of death stay your hand nor defeat your courage. The warrior who will prevail is the one who conquers death, who becomes one with death as we have." - Phoenix Lord Maugan Ra
B
Bad: Women
Badb: Lady
Badbaltrilas: A Lady doubled-armed with swords of light
Badd: Female
Baharr: Wind and Storms
Bahn: Energy beam
Bahzhakhaim: Tempest of Blades and is the approach taken by the Craftworld of Bail-Tan.
Bal: Double Armed
Baruth: Rushing Air
Belac: Way
Belah: Path
Belar: Route
Benathai: The familiar of a Shadow Seer
Bennan: Harvesting
B'fheidir: Maybe and perhaps​​
Bih: It was
Bionerath: Potency held in check
Bionnearan: Concealed
Bionnenan: Potent
BonioKar: Daydreaming
Boniokel: Wonder about it
Bonnikel: Think about it
Borif: Giving
Borrial: Gifting
Bratha: Adoring
Brathai: Caressing
Brathu: Kissing
Brathu-angau: The kiss of doom/evil or Harlequin kiss
breag: Lie
breaga: Deceive
Brion: Misinform
Bruath: Movement
Bruiith: Movement
Bruith: Gesture
Brylidassian: Opener of the Gates of doom
Buanial: Entitling
Buanna: Reaper or Shuriken Cannon
Buanneth: Gathering
Original Materials
This is a project that has been worked on for a while and mainly for my own needs so I never thought of recording page numbers etc. as I never thought it would leave my notebook but for those interested, it has been collected from the following locations:
Rogue Trader (1987), Warhammer 2nd/3rd/4th/5th Editions, Eldar codex (2nd ed/3rd ed/4th ed), Codex Dark Eldar, Citadel Journal #17, White Dwarf #127 (original Eldar army list), Codex: Titanicus, Codex Necrons, Warhammer 40,000 compendium, Warhammer 40k Wargear (2nd ed). Battletome Sylvaneth. Battletome Daughters of Khaine. Battletome Idoneth Deepkin.
Black Library Novels: Shadow Point, Harlequin, Chaos Child, Farseer, Tales from the Dark Millennium, Warrior Coven, Path of the Warrior, Path of the Seer, Eldar Prophecy, Valedor, Asurmen, Jain Zar, Rise of Ynnead: Ghost Warrior, Rise of Ynnead: Wildrider.
**Also there is this web version of an Eldar dictionary that turns out has been around since 1990. It's more complete than what I have collected and better organized. This link was requested to be added by David Grophland: Eldar Language.
Posted by Adventures with Peps at June 04, 2020