A Return to Badab 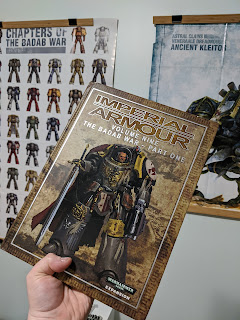 Games Workshop you tease! Just as I started to decide on my next 40k Army (link), they announce a new version of 40k is coming out. That's fine and all but it really has slowed down my drive to start building or painting anything Red Corsair. What if there are new models coming? What if Huron is finally getting a new model? What if a different army takes my breath away? Help!
In an attempt to stay sane and keep my army ideas flowing I have dusted off the tome that started it all: Forge Worlds - Imperial Armour Volume Nine - The Badab War. I remember reading this when it first came out and falling for the Astral Claws. Though the villain of the tale and later to become the Red Corsairs, this Space Marine Chapter truly believed they were doing what was best for the Imperium at large. All they wanted to do was finally cleanse and gain full control of the Malestrom, a lofty but pretty sane goal. Image if they had achieved that feat! Huron would be viewed as a hero, instead of an arch-villain. It's this fall from grace story arc that caught my attention the first time around and led to me having about 2k in Marines of them, which are now long lost to the warp.
Fast forward and that army is no longer a reality, sure I could do a Primaris version and claim some bull about Crawl using their gene-seed to recreate a "loyal" version of the chapter, but I don't want to that, I could collect the old space marines and claim a section remained loyal, but I feel they would have been purged by now. It would also break my soul to do that, as a loyal follower to the Tyrant I feel I must create a Red Corsair force and stick to the theme and ride out the death throes of 8th edition before riding strong into 9th.
And to look into the future we must study the past and that brings us back to the book, as I crack open this book I am already filled with ideas for squads and characters based around what I am reading. I am thinking of a sub-Warband made up of the last of Tiger Claw marines, maybe some veterans made of different chapters that sided with Huron (Lamenters, Mantis Warriors and Executioners), maybe even some of the chapters sent to hunt him have since joined him after becoming disenfranchised. Valthex must be having a field day with all the dark tech he can build and The Corpsemaster – Garreon....have we seen the Fabius Bile Model? Perfect starting point.
The great joy of this book is that as I read it I am collecting names of Marines, Dreadnoughts and  Ships that possibly survived that I can add to my force to give it some character. But what I really need is to know what is GW doing? Release the damn game and tell me what order the new codex is coming out in! I want to start building something but I want a list to build towards first.
Thanks for reading the rant. Drop me comment if you have any advice.
Posted by Adventures with Peps at June 22, 2020