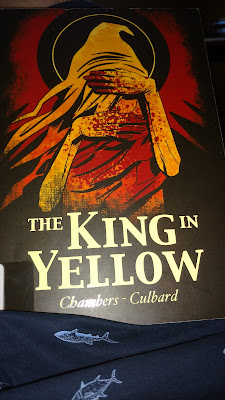 Welcome to this week's creepy comic review. I've been a fan of Lovecraft and his mythos for a long while, the idea of elder gods and monsters tormenting us mere mortals for some reason really calls to me. I know from reading biographies on Lovecraft that he was inspired by other writers at the time and one such person was Robert W. Chamber. The book which this graphic novel is based on is a collection of weird fiction all tied together using the theme of a play, which is believed to cause the reader to descend into madness if read.
Book Stats
Type: Hardback
Page Count: 143 Pages
Original Author: Robert W. Chambers
Adapted By: I.N.J. Culbard
Publisher: Self Made Hero
Date: 2015
This graphic novel retells the following four stories The Repairer of Reputations, The Mask, The Yellow Sign and In the Court of the Dragon. I ultimately found this to be a worthy retelling with Culbard slightly changing the odd part to help with the flow of the tale. For the graphic novel, Culbard relies on the single character Jack Scott to anchor the story arcs and combine the four tales into one narrative. The artwork is atmospheric and beautifully coloured. I found myself creeped out with a few of the panels and it has left me wanting to read the original source material, I'm intrigued by a few of the themes in the tales which for me is always a great sign.
Have you read this tale? Let me know in the comments below. Thank you for stopping by and I hope you'll hit the follow button. 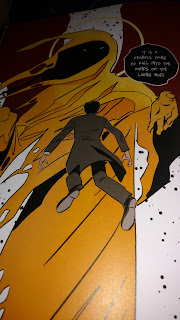