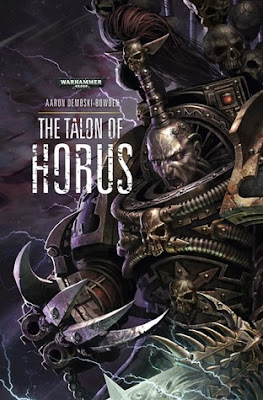 The final week of my Thousand Sons books has arrived. What a trip here is a list of the titles I've managed to complete for this project:
Ahriman: Sorcerer
Ahriman: Unchanged
A Thousand Sons
Magnus the Red: Master of Prospero
It's definitely been a month of two halves. The Ahriman titles fell flat for me and left me dis-hearten but then A Thousand Sons and Magnus lifted my spirits and renewed my faith in this reading project. Having now read the most common titles linked to the legion I was struggling as to were to go next. The obvious choice was another Horus Hersey title called the Crimson King but it is 30 titles further along into the series, and I didn't wish to go that far ahead. Lucky for me a friend had a good suggestion and led me to The Talon of Horus. How can a Black Legion book fit into the Thousand Sons month? Let's jump in and find out.
Book Details
Title: The Talon of Horus (Black Legion #1)
Author: Aaron Dembski-Bowden
Publisher: Black Library
Type: E-book
Page Count: 352
Commercial Fluff: When Horus fell, his Sons fell with him. A broken Legion, beset by rivalries and hunted by their erstwhile allies, the former Luna Wolves have scattered across the tortured realm of the Eye of Terror. And of Abaddon, greatest of the Warmaster's followers, nothing has been heard for many years. But when Horus's body is taken from its resting place, a confederation of legionaries seek out the former First Captain, to convince him to embrace his destiny and continue what Horus began.
Review 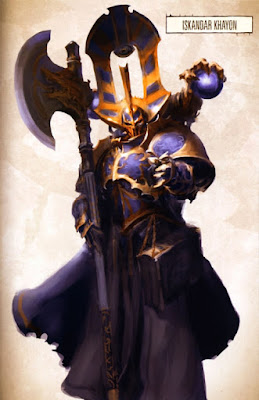 So how did it tie into the Thousand Sons you ask? Well, this entire story is told by Iskandar Khayon an ex-Thousand Sons sorcerer. It follows on in the wake of the Horus Hersey (by about 1000 years) and how the various traitorous Legions are in a constant state of warfare, for resources, slaves and territory. In this mix of constant warfare Khayon and a mixture of other Astartes hear of a rumour about the resting place of the Vengeful Spirit and go in search not knowing they were taking the first steps in building a new legion and creating a Warmaster.
Ultimately this is a story of how the Black Legion became an all-powerful force within the Eye of Terror. It shows how not all the Astartes are slaves to the dark gods and how some just want to be lead and reclaim past glories and right wrongs. The story is full of great characters and interesting locations, it deals with themes I haven't heard before like aldari serving Chaos Lords and it even has a cameo from Fabius Bile!
A great opening tale to the story and great Thousand Sons read as Khayon is neither a loyal son to Magnus or a follower of Ahriman, he and his followers are claiming their own path and leading the traitor legions into new glories. As soon as I finished this tale I picked up the next novel, which is the highest praise I can give. It is weird to read this tale and find yourself rooting for the villains to win but in a location like the Eye who is to say who the real villains are?
This was a great read to fit in with my timely decision to build a Chaos Army, though not Red Corsairs it does show how different legions can merge to form one force. It has got me thinking of possible characters I can build and create to bring my Corsairs to life and how each might form a separate part of the whole.
As always thanks for stopping by. Please hit follow if you can and drop me a comment to say hi!
Posted by Adventures with Peps at May 29, 2020