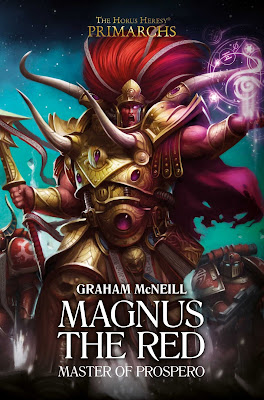 Wow, week four of the Thousand Son themed month of reading. I didn't actually realize how many Fridays there were in May until it was too late to turn back! So far I have read and reviewed the following titles:
Ahriman: Sorcerer
Ahriman: Unchanged
Horus Heresy: A Thousand Sons
Got to say the Ahriman titles were a little dull. Dealing more with the side characters rather than the main attraction. The HH series A Thousand Sons was everything I hoped for and more, it really showcased this legion in a more positive and inspiring way. So once I had finished that title I knew I had to move onto the Primarch series and take on Magnus the Red: Master of Prospero.
Book Details
Title: Magnus the Red: Master of Prospero
Author: Graham McNeill
Publisher: Black Library
Type: E-book
Page Count: 208
Commercial Fluff: The third novel in The Horus Heresy: Primarchs series, a brand new sequence of novels focused on the superhuman sons of the Emperor.
Lord of the mystical and uncanny, Magnus the Red has long studied the ancient crafts of sorcery. A psyker without peer, save only for the Emperor himself, he commands his loyal followers of the Thousand Sons Legion in the Great Crusade, always vigilant for any lost knowledge they might recover from the remains of dead human civilisations. Now, fighting alongside his brother Perturabo of the Iron Warriors, Magnus begins to foresee an approaching nexus of fate. Will he remain true to their mutual aims, or divert his own efforts towards furthering his own mastery of the warp?
Review
Having just completed A Thousand Sons I was extremely excited to read that Graham McNeill had written this title as well. I really was hoping for even more behind the scene and character building for this legion. It also soon became apparent that it had a cheeky inclusion of Iron Warriors alongside a non-Xenos threat - a rather rare plot in Space Marines battles. The story happens on Morningstar as it is being destroyed by destructive magnetic storms, into this mix an uprising of sorts has been started by a cult called the Sons of Shaitan. Whilst the Thousand Sons and the Iron Warriors attempt to retrieve as much of the resources of the planet as possible, they bump heads on how best to do it. Magnus and his sons care about the history, culture and knowledge of the planet whilst the Iron Warriors care more for the resources and materials, though the two sides have differing views they are remarkably similar in not hugely caring for the human populace!
For me, a standout part of the tale is the brotherhood of Perturabo and Magnus which Graham McNeill plays out wonderfully out using the characters of Forrix and Ahriman to mirror their gene sires. It is always nice to read about the Traitor Legions prior to their falls especially as it hints to some of Graham McNeill's other books. Well worth the read and a great side story to the Horus Heresy series.
Drop me your thoughts in the comments and hopefully next week I will have the Talon of Horus as the final installment for my month of Thousand Son themed stories. 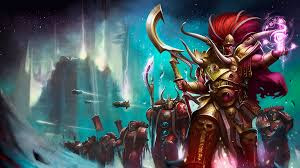