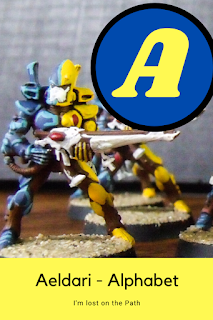 My Eldar Encyclopedia is becoming a bit bloated and over complicated so I am attempting to fix this. Starting with the A-Z of Aeldari words I have over there. Whenever I have the urge I will post a section of that page, create a link to this page and see if it tidies up the page and makes me feel happy once more.
A
Aarthia: Showing
Addan: White
addankiamenad: Ash
addin: Dust
addinav: Sandman
Addol: Transparent
Aeldari: A catch-all term for the races of Dark Eldar, Harlequins, Corsairs, Exodites, Outcast and Craftworld Eldar.
ag-: False or lying
Agaith: False face and is the device that is worn by Harlequins to project their foe's worst fears.
Aiek: Grasping.
Aiel: Touching
Aika: Holding
​​aill- (prefix): Possibility or would
Ainaarin: Expecting
Ainiluin: Waiting
Ainulin: Delaying
Aith: Face
Aithben: Nose
Aithliam: Mouth
Alaitocii: From Alaitoc.
Alean: The mythological steed of Khaine.
Aliachemoranthrashe'ill: The swift and final twist of the crescent blade.
am-: Imperative
Amure: Waning
An: Then or Next
Anaris: Dawn Light
Anastari: Raven
Angau: Doom
Angau: Fate
Angaur: Destiny
Ann: Warring one
Anthemion: An Aeldari myth about a wanderer with a Golden Harp.
Arathi: Displaying
Arathinos: Manifesting
Ard: Master
Ardathair: High Avatar
Ard-Iadanna: Pirate Captain
Are: Honoured
Arebennian: The word given to Harlequin Solitaires.
Arioth: Yellow
Arith: Red
Arten: Woman
Ash: World/Planet
Asha: Soon and relates to in the near future
Ashafar: Looking
Ashafares: Seeking
Ashfar: Wanting
Ashkam/Asskam: Who?
Asturi: Respect
Asurentesh: Asuryan's Heart
Asurya: The Eldar word of Phoenix Lord.
at: Pale or light in colour
Athag: Face of
Athair: The Eldar word for the Harlequin unit 'the Harlequin Avatar,' and the same one who plays the Laughing God in their plays.
Athelin Bahail: Mind Choir.
Atherakhia: Destruction
Athesdan: High Warlock
Athe-Sier: Exodite Lord
Athistaur: Master Mime
Autarii: Shades (Shadow people).
Original Materials
This is a project that has been worked on for a while and mainly for my own needs so I never thought of recording page numbers etc. as I never thought it would leave my notebook but for those interested, it has been collected from the following locations:
Rogue Trader (1987), Warhammer 2nd/3rd/4th/5th Editions, Eldar codex (2nd ed/3rd ed/4th ed), Codex Dark Eldar, Citadel Journal #17, White Dwarf #127 (original Eldar army list), Codex: Titanicus, Codex Necrons, Warhammer 40,000 compendium, Warhammer 40k Wargear (2nd ed). Battletome Sylvaneth. Battletome Daughters of Khaine. Battletome Idoneth Deepkin.
Black Library Novels: Shadow Point, Harlequin, Chaos Child, Farseer, Tales from the Dark Millennium, Warrior Coven, Path of the Warrior, Path of the Seer, Eldar Prophecy, Valedor, Asurmen, Jain Zar, Rise of Ynnead: Ghost Warrior, Rise of Ynnead: Wildrider.
**Also there is this web version of an Eldar dictionary that turns out has been around since 1990. It's more complete than what I have collected and better organized. This link was requested to be added by David Grophland: Eldar Language.
Posted by Adventures with Peps at May 31, 2020