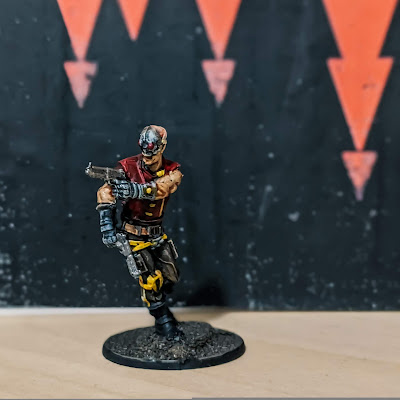 Following on from last Monday's post (link) I have the model I wish to use as the Blood Pact Gang Lieutenant. It was one of the figures in the Warlord Games starter box set, a bald, mask-wearing, duel pistol-wielding hoodlum. A pretty simple looking plastic model painted quite quickly with Games Workshop contrast paints. It's made with their plastic resin sets, which turns out to be quite fragile if you drop them. But let us move on - here is Dan Abnett Block top Blood Pact Lieutenant Sholen Skara.

After being recruited into the Blood Pact Gang early on by the mysterious Urlock, Sholen got involved in The Great Block Purge. During this aggressive Block takeover, Sholen led many of the raids during this early time and helped Urlock take over the entire Dan Abnett Block.

Now the main enforce for the Blood Pact Sholen leads raids into other blocks throughout Sector 102 in the hopes of furthering the Urlock's goals.

That's two gangers down and 21 points built and painted. I feel I need a lot more low-level punks to really flesh out the gang. As always let me know your thoughts, thanks for stopping by!
Posted by Adventures with Peps at April 13, 2020