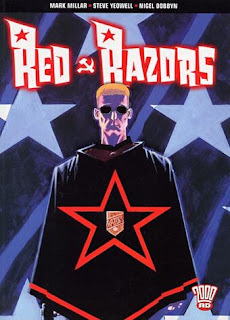 Moving on over to the far side of Dreddverse for this comic review. Today we head into Sov territory to discover how the other side lives. The title of this comic is Red Razors, a tale I fondly remember from my teenage years. I hope after re-reading this it will still hold up.

Commercial Fluff: You're Next, Comrade! Sov-Block two is the only remaining city in future Russia, a cultural melting pot, where capitalist American influences have melded with more traditional lifestyles like ultraviolence, kidnapping and murder.

First up this is a collected set of tales telling the full story of Red Razors. I personally wish they had set the tales up in the actual timeline order, rather than as written. It felt weird reaching the final tale and it ended up being the introduction to the character. With this in mind, I will start with the final tale and then go back to the start. 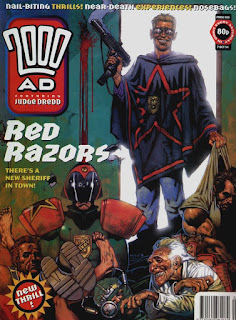 Rites of Passage (Originally written for Prog 971) - We are introduced to a sixteen-year-old killer, who is attempting to gain access to the most dangerous Gang in town the Red Deaths. To gain full membership Red Razor has to kill too of Sov-Blocks Two most dangerous criminals, who also happen to his parents!

This is an amazing starting intro to a new character. Though Razor doesn't say much, his actions speak volumes. Flaming his mother and sticking a bomb in his father's mouth, to gain entry into this ruthless gang. We also see Spike for the first time, a blindfolded gang leader with bold visions for the future.

Then we jump back to the first comic strip in the book.

Red Razors (Originally written for Judge Dredd: The Megazine 1.08-1.15) - Where the above tale was written to introduce us to Red Razor, this one seems to introduce us to Sov-Block Two and how it fits into the Dreddverse world. We learn that following Mega-City One's bombing of Sov-Block One,
Sov-Block Two had to rebrand and opened its door to American culture. Jump forward to the now and Sov-Block Two is a cultural nightmare, fast food chains, a religion based around Elvis and a Chief Judge who bought out the position. Into this mix, we have a pensioner terrorist group wanting to revert the city back to its Marxist days.

A weird tale involving the thief of the Bones of Elvis and Red Razors' adventure into the Cursed Earth. It was cool to see what had happened to Sov-Block One and the Justice Department, Judge Nutmeg was a creepy villain, but the whole western culture taking over felt like a cool nod to how the cold war affected Russian culture. 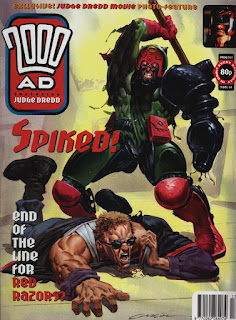 The Hunt for Red Razors (Originally written for Progs 908-917) - Sov-Block Two has regained control of itself culturally, pushing back on western culture. But the city is still torn in two as the Red Death has a large control of the city. Into this mess, Red Razor is hunting down Spike his former mentor to finally bring down his old gang. When the face-off finally happens Spike detonates a bomb blowing them up. Razor survives but his brainwashing is damaged causing him to go, rogue, causing a huge embarrassment to the Justice Department. Then into this mix, Spike is back. In an attempt to bring Spike into the Razor Judge program, Spike is given a new cyborg body. During the chaos of Razor going Rogue the Red Death lead a raid on Justice Central capturing Spike and bringing him online before his brainwashing. Throw into this mix Judge Dredd and we have something for everyone.

Absolute chaos ensues and we finally get the showdown that the tale has been building up. It was weird to throw Judge Dredd into the mix, seemed a little forced. But this strip bought back all the good memories of my teenage years. Such a great ending especially the final wordless panels.

Overall this volume is a nice send-up for a branch of the Judge Dredd world that has been overlooked. It is also a nice take on the Cold War era as we get to look at a soviet-style megacity. Basically, a great read that I had left to long.

Let me know your thoughts and drop me a comment below.
Posted by Adventures with Peps at April 14, 2020