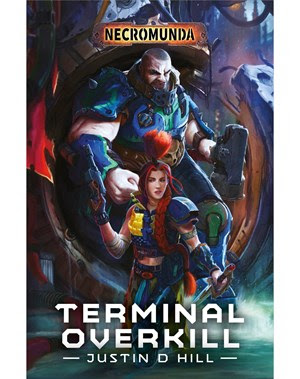 I was super excited about this book, I was a big fan of Necromunda the first time around, played hours and hours of it as House Goliath and Delaque. And I have failed to restart with the newest inception (shame on me) and I was hoping that this book would reignite my passion. I will let you know if it did after the review.

Commercial Fluff: In the polluted, sprawling hive cities of Necromunda, life is short. From the decadent heights of the Spire to the murderous deeps of the underhive, those on the climb must be bold and brutal, or face a violent end.

When the barbarous Fettnir, Goliath overlord of the Chemfall Butchers, turns his attention to Escher territory, the result is nothing short of a massacre. Brielle of the Wild Hydras escapes the slaughter and is cast into the deepest levels of the underhive. Determined to avenge her family, Brielle vows that she will end those responsible, but to reach Fettnir and the bounty hunter who murdered her mother, she must first survive… and the darkness is full of horrors.

As mentioned I was hoping this book would spring me back into Necromunda and boy did it do that!

But before I get too excited I do have one little peeve, the title and cover artwork. Weird thing to be annoyed about but the cover suggests that we could see a team up of a Goliath and an Escher, which we don't, also Terminal Overkill made me think it was going to be some sort of train/shuttle terminal adventure, it wasn't. (Though I kind of want to make an abandon train terminal for ore as a back drop for Necromunda games). But that doesn't really matter as the story was great.

Weirdly not a straight forward tale this book kind of reads like a diary. In which we see the entire life of an Escher from start to finish. It is also full of classic story arcs, like the hero is wronged, exiled, grows strong and comes back to kickass. But this was done really well.

The main character Brielle, is an easy character to like, and you follow her as she fights and struggles to survive in the Underhive. The settings we find her in are pretty inspiring, be it her original gang's base of operations (The Wild Hydras), which was similar to a wild west town all the way to foundry of the Goliath's (The Chemfall Butchers), which was very factory/industrial. The other main character I guess is Fettnir, he is mentioned a lot but only turns up towards the end. But the author makes a get job of making him the big bad wolf/boogie man, and you can't help but feel the tension and fear building as you slowly reach the final face-off.

Overall a great read and the perfect reintroduction to Necromunda. I'm definitely tempted to put some money into the figures, but not sure about the rules let. As I doubt it will knock Judge Dredd of the top-spot, but it will give me a fun little side project to work on (maybe if the figures aren't too huge I could use them in Dredd?).

Ultimately I am feeling inspired and thinking about terrain ideas thanks to this novel. So a pretty big win in my opinion.

Have you read this book? Let me know your thoughts below. Next book will have us heading back to the Horus Heresy with Mechanicum. Thanks for stopping by.
Posted by Adventures with Peps at April 10, 2020