Audio Review 13 // Watcher in the Rain 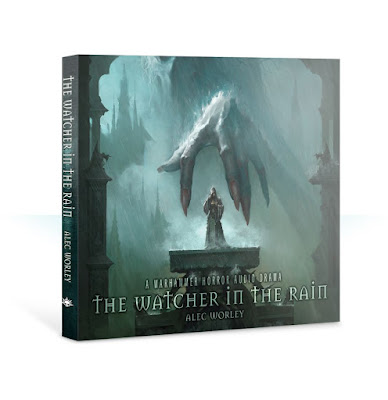 Unlucky for some it is time for Audio Review 13. Now it won't surprise anyone when I say that it is a Warhammer 40,000 tale. Back in February I had my first adventure into Warhammer Horror with the House of Night and Chains

Commercial Fluff: In the far reaches of Imperial space, a ferocious warp storm approaches an Administratum world, cutting off the entire planet from the rest of the Imperium. As their towering grey spires are punished by endless rain, countless administrators, tithe-masters, and book-keepers are forced to evacuate. Among them is Greta, a lowly data-drone with a terrible secret, wanted for questioning by the sadistic Imperial interrogator Stefan Crucius. As disaster strikes and the pair are left stranded in the depths of the drowning city, captor and captive must co-operate to stand any chance of escaping. But a mysterious presence stalks them through the abandoned, flooded towers, a dread entity each must confront but which neither dare acknowledge, a Watcher in the Rain

Wow. Once more Black Library have created a immersive world to get lost in. The acting was exciting, the sound effects on point and add depth to the surroundings. And what amazing surroundings they are. We are flung to an Administratum world that is starting to find itself absorbed into a warp storm. As the populace attempts to evacuate the weather weirdly turns south and starts constantly raining, causing the cities to start sinking in overflowing waters.

Into this mix we meet Greta Vern a data drone who seemingly has been wrong accused of a crime by Interrogator Stefan Crucius. Following a quick chase scene the pair are forced to work together in an attempt to escape the sinking city and the planet itself. As the pair continues through the city the Interrogator seems to keep seeing someone or something watching them from a far, is it Greta's cult or something far more sinister...

I really enjoyed this tale from start to finish and the insane patients that have escaped, really made for an exciting and weirdly believable scenario for the pair. I found myself surprised and happy with the conclusion of the tale which I will do spoil.

A definitely worth while listen that I plan on listening to again soon.

Have you partaken any audio dramas of late? What should I check out. Let me know in the comments below. Thank you for reading.
Posted by Adventures with Peps at April 02, 2020