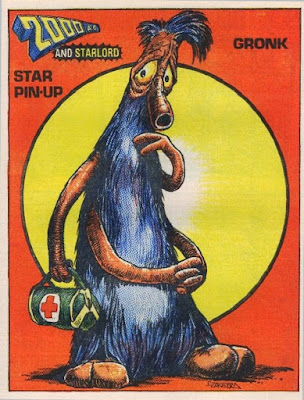 Welcome to an actual Miniature Monday! That's right it is a Monday and I have a painted mini. Not a WIP but an actual painted mini. But the shocks don't stop there I actually have two minis...I guess all I needed was isolation to get some hobby done.

What is a Gronk? Well here is the official history.

The Gronk is a character from the Starlord and 2000 AD strip Strontium Dog. Gronks are a timid life-form from the planet Blas in the Gallego system. Mutant bounty hunter Johnny Alpha first encountered and befriended a Gronk, later named as Gloppus, fairly early in his career, on the astro-liner Sondheim. The creature promptly keeled over and died of a heart attack caused by the shock of being hijacked by space pirate Papa Por-Ka. Alpha's partner, Wulf Sternhammer, took the Gronk's pelt to wear, in deference to the traditions of the Gronk's home planet.

Shortly afterwards, on the planet Paprika (a windswept outpost on the far reaches of the galaxy) Alpha and Sternhammer met another Gronk masquerading as a female human fortune teller called Madame Desiré. This Gronk recognized Wulf's pelt as having belonged to his brother. (All Gronks are identical — to the casual non-Gronk observer, anyway — and apparently have no names, although the second Gronk said that his brother had been called Gloppus. A nickname, perhaps?) The Gronk insisted on joining Alpha and Sternhammer in their adventures as their medic, despite the perils of such an occupation and the tendency of Gronks to suffer heart failure at the slightest sign of excitement. 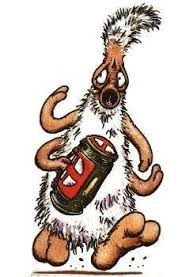 Eventually, when Johnny Alpha's father Nelson Bunker Kreelman took over the Strontium Dog's orbital HQ, the Doghouse, in order to seek revenge on his son, the Gronk suffered several near fatal heart attacks after discovering his plans. He did, however, manage to free Alpha from his father's torture machine. Following this, the Gronk ceased to accompany Alpha and Sternhammer on missions and, indeed, it was assumed by many that he had died.

According to one account which may or may not be true, following the destruction of the Doghouse and Johnny Alpha's apparent death, the Gronk suffered another heart attack which resulted in a hitherto unsuspected aggressive and fearless side to his nature coming to the fore, and he took up Johnny's badge and, alongside the mutant Feral Jackson, travelled to the homeworld of the Lyran sorcerers in order to release Johnny's soul. In an emotional scene, the Gronk seemingly killed his friend again in order to free him from everlasting torment — a fate worse than death — before declaring of the Lyrans that "nobody gets out of here alives", and apparently destroying them all. NB: This story may be apocryphal. Since new information concerning Alpha's fate has since come to light, it's probably best to regard the entire 'savage Gronk' storyline as not canon.

There you have it, The Gronk. Now you know all about him/it/them let us move onto my painted versions. 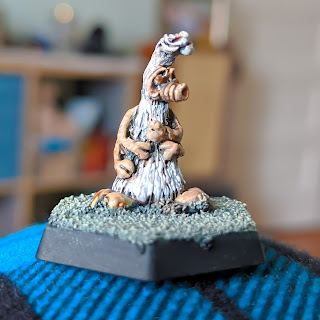 As mentioned before I have painted two Gronks the first is a very old metal model made by Games Workshop about 1984. This was back in the time when Games Workshop had the rights to 2000ad and even had a Judge Dredd Roleplaying game (how cool was the 80's). What I don't understand is why they made this as they had no rules or a game to play along with unless someone knows different.

This is most likely lead judging by the age of the model. It was also crazy tiny! It is about the size of my wedding ring. It was a very simple paint job, base coated black, then brown, then dry brush grey and finally white. Of the white I did pallid flesh on the skin and then finally Gulliman Flesh Contrast on this. I then attempted to pick out the eyes and clean up some errors. Definitely not super pretty, but great for table top. 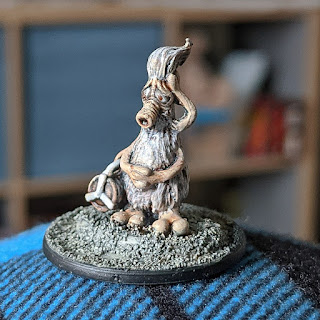 Then we move forward to 2019 and the Warlord Games Gronk. Warlord Games (currently my favourite game producers) managed to pick up some licensees from 2000ad and started producing the Strontium Dog figures before moving onto Judge Dredd. The Warlord Games Gronk shows exactly how far miniature design has come, still made from metal but this time user friendly and not lead. He is also carrying a cool little first aid kit. I love the expression as well, it is full of character and life. I painted it exactly the same way as the Games Workshop one.

Between the two minis I spent about 30-40 minutes tops on these from start to finish and they were truly a joy paint. Now I'm itching to paint more. I am eyeing up a Wulf Sternhammer at the moment so watch this space.

As always I hope you enjoyed this and drop me a comment and if possible hit that follow button! Until next time.
Posted by Adventures with Peps at March 23, 2020