For this Miniature Monday I am showcasing a classic 1980's Games Workshop miniature from the Judge Dredd RPG games. The Judge Child aka Owen Krysler - This model is pretty small, not as small as The Gronk from last week, but not far off. Made from classic lead metal the details are quite flat on the model, with the only real texture coming off of his robes. I went for quite a simple paint scheme of a heavy flesh wash and then yellow for his robes, I feel I want to go back and do a little more highlighting on the skin, and fix the eyes as I now realise he is  but ultimately pretty happy with 30 minutes of work.

If you are only here to look at pictures feel free to scroll through and drop me a comment below, but if you would like to read more about this character then carry on....

The Judge Child aka Owen Krysler

Owen Krysler was a 2000 AD villain also known as "The Judge Child". He would show up in several early Judge Dredd story arcs and is one of the better known members of Dredd's rogues gallery.

Krysler was a young child in his early teens, although he was a mutant he looked nearly normal past his pitch black eyes and eagle shaped marking on his forehead.

Krysler showed very little emotion not even shedding a tear when his parents were lynched in front of him (though it could be argued that this was because he had already known it would happen, and so was prepared). However he was cocky and arrogant often mocking others and calling names, and sadistically enjoyed forseeing others deaths. After his abandonment on Xanadu by Dredd, his hatred for the Judge grew and grew.

Judge Feyy, a dying member of Psi Division, has a precognitive vision that Mega-City One will be destroyed unless the Judges can find the "Judge Child," a boy called Owen Krysler with extreme telepathic and precognitive powers. He also a birthmark on his head shaped like the Judges' Eagle. Krysler is destined to rule Mega-City One in its direst hour. Judge Dredd is sent after the boy and tracks him across the Cursed Earth to Texas City where the Judge Child falls into the hands of the Angel Gang who escape from Earth. Dredd uses the ship Justice One to pursue the gang and the Child across a number of star systems and through various strange encounters with alien worlds. Dredd becomes convinced that only by using Oracle Spice will he be able to find the Child, and after further dangerous adventures he gains the Oracle Spice on the planet Necros. Oracle Spice gives precognitive powers to whoever takes it (similar to and possibly a rferance to the spice from the Dune saga), but is very dangerous to the inexperienced user. Dredd orders a member of the Justice One crew, Judge Lopez, to take the Oracle Spice. This kills Lopez, but not before he reveals that the location of the Judge Child is known by the 'Jigsaw Man,' whom Dredd traces to the planet Ab. The 'Jigsaw Man' is a human called Prosser who had been the pilot of a spaceship hijacked by the Angel Gang, who are heading to the free robot planet of Xanadu. Prosser's nickname stems from the fact he is a victim of the alien wasting disease known as "Jigsaw Disease", which causes the victims to vanish piece by random piece. Just before he dies he tells Dredd that he believes the Judge Child is evil, because it was the Judge Child who caused him to catch the disease in the first place, apparently intentionally. 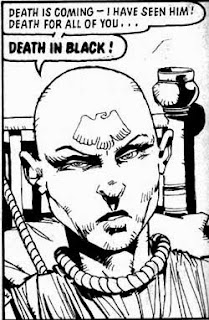 Dredd begins to doubt the mission but continues to Xanadu where he confronts and kills most of the Angel Gang, who had also begun to suspect the boy had been manipulating them. However the last of the Angel Gang is killed by the Judge Child himself. Finally having hold of the Judge Child, Dredd looks into his eyes and sees that he is evil. Believing that the ruler of his city has to be pure and uncorrupted, and that Owen Krysler is unfit to rule, Dredd abandons him on the planet and returns home.

For deliberately failing in his mission, Dredd himself had to be judged, in the story's epilogue Block War in prog 182. This story introduced another major character, Judge McGruder, who thought that Dredd had exceeded his authority.

In a sequel called Destiny's Angels, the Judge Child was executed for attempting to assassinate Dredd in revenge for depriving him of the opportunity to rule Mega-City One. In McGruder's eyes this vindicated Dredd's earlier judgement of him, and she authorised the execution herself.

Hope you enjoyed reading about The Judge Child. As always drop me a comment to say hi. Or if you feel generous give me a follow in the top corner of the blog. Thanks for stopping by. 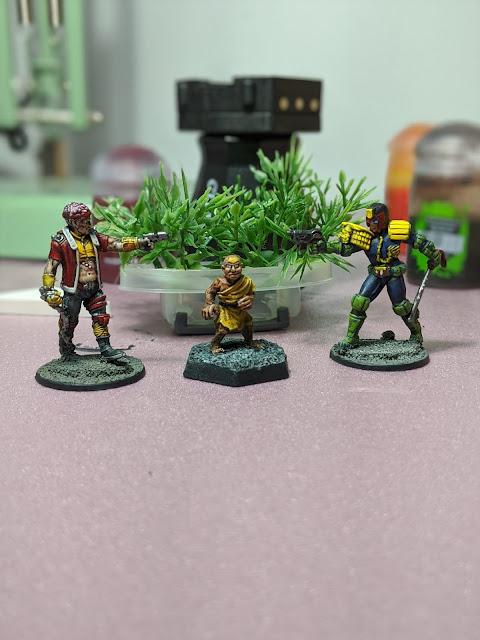