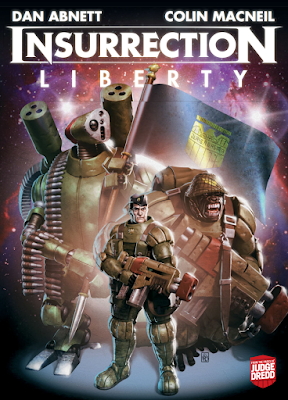 Welcome back to the first comic review of the isolation period. I hope everyone is do well, feel free to chat to me in the comments and say hi! In a rare turn of events I was actually able to read the two volumes of Insurrection comics, back to back which is quite nice. If you haven't read the first review please follow this LINK.

We left the team sparking rebellion in the outer rim and causing so much aggro for the SJS. Now we are to find out how it all concludes. I was pretty excited heading into this.

Page Count: 96
Written By: Dan Abnett
Artist: Colin MacNeil
Commercial Fluff: MEGA-CITY COLONIAL SPACE, 2135 AD. Mining colony K Alpha 61 renamed itself Libertyafter cutting loose from the Big Meg. Furious at this dissent, and in a bid to stop the revolt spreading to other colonies, the SJS launched a blistering attack on Colonial Marshal Karel Luther’s forces. Now, the alien Zhind have stepped up their attacks on the colony worlds causing an uneasy alliance to form between the SJS and the insurrectionists...

This thrilling conclusion to Insurrection was written by Dan Abnett (Guardians of the Galaxy) with art by Colin MacNeil (Judge Dredd). 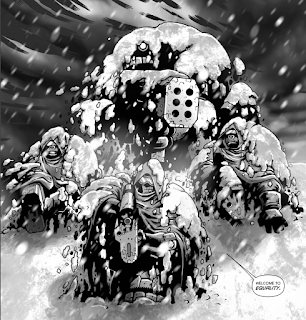 We are introduced to Gateway a beautiful well protected colony world in the outer rim. Here we meet Colonel Judge Gallows, who is welcoming his family to the planet. Unfortunately the Zhind lead a surprise attack on the planet. Normally the stationed fleet would deal with the problem but due to Luther's uprising the fleet has been called away, leaving the planet open to attack. Gallow along with a large core of the fleet fail to follow commands and stay back in a failed attempt to save Gateway, in doing so they too become rebels.

After locating Luther's forces on an ice moon, Gallows reports the location to the SJS. Of course the SJS come with overwhelming fleet strength and it looks like the end for the Insurrectionist. That is until the Zhind once again invade Mega City Space, leading to a sixteen week long campaign. During this time the Insurrectionists join forces with the SJS and actually lead the last assault again the Zhind command bunker. Here I will leave the review as I hate to many spoilers the ending is pretty epic and heart breaking, so go read it yourselves.

Amazing tale, amazing art and left ultimately sad at the thought of no more. Great work by the entire team on this. 5 Star comic for sure.
Posted by Adventures with Peps at March 31, 2020