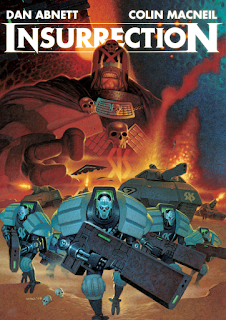 Welcome back to another comic review. This graphic novel I first read about three or four years ago and had completely forgotten to review it, so I now I am finally reading it again and correcting my errors with this review.

Let us dive into Insurrection.

Page Count: 131
Written By: Dan Abnett
Artist: Colin MacNeil
Commercial Fluff: Mega-City One mining colony K-Alpha 61 has declared independence from the ‘Big Meg’ and renamed itself Liberty. This act of defiance has angered the Justice Department’s Special Judicial Squad and in a bid to stop further colonies from rebelling, war is inevitable... 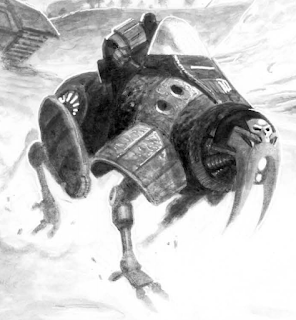 This comic is split into two parts the first is Insurrection, which is where we will start. Originally published in the Judge Dredd Megazines 279-284, this story lasted five issues. Our main character is one Karel Luther a Colonial Marshal on K-Alpha 61. For the last two years Luther and forces on K-Alpha 61 have been fighting an alien force called the Zhind, in order to defeat the alien forces Luther granted the mutant, droids and uplifts a citizenship status (ie. equal now in rights to humans). Once the threat of the Zhind had been dealt with MC-1 attempts to regain control of the world ordering Luther to revoke the offer of citizenship. This Luther can not do and instead claims Independence from MC-1 and names the world Liberty.

Of course MC-1 doesn't take it lightly and sends the SJS space fleet to deal with the issue and bring Liberty to heel. Soon Liberty is back on a war footing and fighting for their lives. It sadly becomes apparent they can't win and the hard choice is made to flee and continue to build a rebellion in the outer colonies.

The C.A.T mounts. C.A.T stands for Combat All-Terrain Transport a four legged mount with built in anti tank weapons. Now these are bad ass and I seriously hope Warlord Games create one of these for their game.

This is an amazing opening story. With plenty of characters to enjoy and a classic underdog story arc. I am excited to see where it goes and for how long the group can survive the wrath of MC-1. 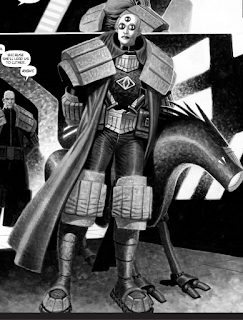 Insurrection II orginally written and published in Megs 305 -310 we once again have a five part story. Unsurprisingly it follows on from the first tale with the leaders of the new formed Rebellion on the run. But before they can continue the good fight they have to save Freely from the hands of the SJS. A daring rescue is completed Simeon and his gang of Uplifts, but unknown to them they are assisted by the Sinister Judge Syren who hopes they will lead him straight to Luther.

Turns out Judge Syren was right and is lead straight to Luther! In the ensuring fire fight Luther is thrown out of a high rise factory window, horrifically burned and believed dead. In the lower factory levels the rebellion leaders retrain the droid populous to become a fighting force to strike back against the SJS. During this period of conflict the droid Handcog discovers a way to strike a blow to MC-1, if they do it they will set mankind back by ten years, if they don't it will disenfranchise the non-human elements of the rebellion.

Judge Syren - A SJS Psi Judge/ Psi Hunter. A completely eerie character, who doesn't verbally talk, has unknown powers and is always accompanied by a cyber dog that can fire flames from it mouth! I really hope this character is seen more in the follow up tales, there is something so sinister and evil about this character.

Great opening two stories. The idea of a disenchanted colony uprising is a great theme. I also like that it is set after Judge Dredd, into the future of MC-1. Meaning the writers and artists had some freedom and the ability to play with things like technology.

The characters are likeable, especially the villains. Who end up caring for all them but I feel Simeon could well be my favourite. 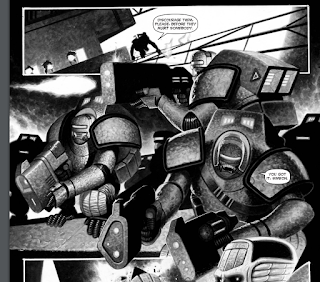 Have you read this comic? What are your thoughts on it all? Let me know in the comments below.
Posted by Adventures with Peps at March 10, 2020