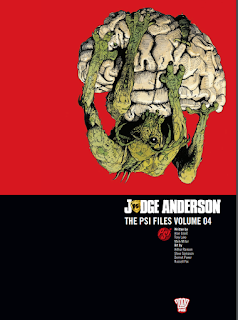 It's been a while since a PSI File issue (PSI 03), so I best do a little recap. Judge Anderson lost her way in PSI Files 02, leaving the Justice System and exploring the galaxy and was a pretty great story arc. After finding herself she came back to MC-1 for PSI Files 03, facing Judgement by Dredd himself and taking on Satan as well (what a comeback).

For me personally the tales have been taking a dark turn and I really hope this theme continues into this collection so let's jump in.

Story: HORROR STORY - Written by Alan Grant, Art by Steve Sampson. Opening tale is about Rookie Evayne who is on final assessment with Judge Anderson. During this final assessment the name Nikodemus arises, an old foe of Anderson's.

Turns out Nikodemus was a powerful psi criminal caught by Anderson and imprisoned. Facing heart failure, Nikodemus chose to suffer a time stretch sentence rather than imprisonment. It was during this that he was able to jump from his body into someone elses. Using this new means of body jumping Nikodemus is able to take over Evayne and cause some chaos. 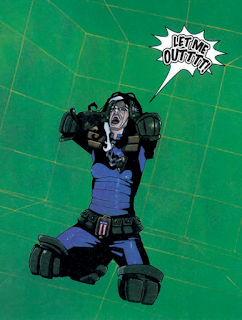 Highlight: The final Anderson twist. Don't want to give it all away but it was great and a honest opening that continues on the dark path of story telling. The artwork of Steve Sampson is also eye catching and beautiful in it's brutally.

Story: SEMPER VI - Written by Alan Grant, Art by Steve Sampson. Whilst Judge Anderson is driving around Sector 11, she receives a PSI Flash of a gang creating torture vids of toys being destroyed. Soon Judge Anderson is tracking them and taking the gang permanently out of business.

Highlight: After seeing his entire gang brutally killed by Judge Anderson the Leader of Gang questions the whole Justice System and for his trouble he just gets a half ass comment. Not a big fan of this story, seemed poorly thought out and a real filler. Great artwork once again by Steve Sampson.

Story: R*EVOLUTION - Script by Alan Grant, Art by Arthur Ranson. Judge Anderson is visiting Vernan D'Arque a man made filthy rich by mining asteroid fields at the edge of our Solar System. He has an alien piece of technology that allows him to absorb other human minds into his own, making him a very successful being. Whilst visiting D'Arque in space Anderson is tasked with discovering the tech and if possible stealing it away for the Tech Judges to play with. But as always nothing goes to plan.

Highlight: Anderson mind along with D'Arque and seven others are transferred into the mind of Kong an uplifted Gorilla, who is then forced to work in an abattoir. It so strange I could never in my right mind think up this story. Love it!

Story: HALF-LIFE -Script by Alan Grant & Tony Luke, Art by Arthur Ranson. Such a weird and strange tale. The big issue is this tale follows on from one not in this PSI File. It would seem Anderson will face off against Judge Death and end up in a comma. Whilst in this comma Anderson is astral projected in the realm of Judge Death back to when he was just Sidney and Anderson sees Deadworld and the rise of Death through the eyes of a young juve. 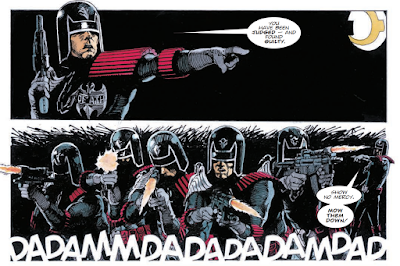 Highlight: Any reason to experience Deadworld is a Highlight. I love this story, I just wish I understood the beginning more. But Arthur Ranson's artwork is beautiful and eerie in equal measure.

Story: WMD - Script by Alan Grant, Art by Arthur Ranson. A team of five specialists (PSI's) use a special machine to enter Anderson's Mind in an attempt to destroy a PSI virus that has attached itself to her mind. One of of the Judges is from the rare Witch branch of the Justice System and is treated with disdain by the other Judges. 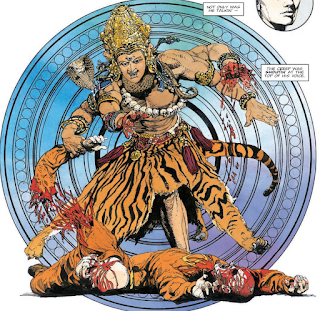 Highlight: Gistane - A Judge Witch. A weird branch of the Justice System that practices witchcraft in all it forms. Gistane is distrusted to all and it seems they have good reason to fear this unusual Judge.

Story: LOCK-IN - Script by Alan Grant, Art by Arthur Ranson. Anderson is back in training following her Half-Life ordeal. But when the PSI Block enters lock Anderson's training becomes a lot more hands on. What is causing the dead to rise?

Highlight: Judge Anderson is 50 years old! I understood they aged every year in the comics but damn 50 and still fighting crime.

Story: CITY OF DEAD - Script by Alan Grant, Art by Arthur Ranson. The Half-life virus has been passed into nano bugs and is now rapidly spreading throughout MC-1. The virus seems to have one of two effects. One - You become a murder. Two - You commit suicide! It's up to Anderson to discover a way to stop it, before MC-1 becomes a City of Dead. 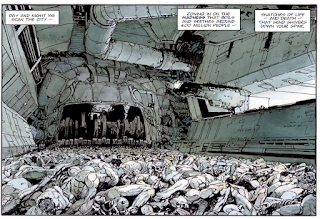 Highlight: I'm really liking the Witch branch of the Justice Department. I wish they would explore this more. I know I feel inspired by it. I also love the dark as fuck final panel showing the Resyk full of the dead.

Story: THE MOST DANGEROUS GAME - Text Story, Script by Mark Millar, Art by Dermot Power: Every year Mega City One plays host to the Charades games between rival blocks. But this year following a murder, Judge Anderson is brought in to investigate.

Highlight: Not a big fan of the story. Seemed rather dated, but did have some classic Judge Dredd tongue in treat moments.

Story: BABY TALK - Script by Alan Grant & Tony Luke, Art by Russell Fox: A new drug is being tested on the down and out. It's name Atom Seed. Unfortunately one test victim is a pregnant lady who's child has a PSI gift. The gifted child manages to reach out to Anderson but can the Judge save the child in time.

Story: GEORGE - Script by Alan Grant, Art by Russell Fox: George is a Satanic Tapeworm and making his human host murder on demand. Lucky Anderson is on hand to deal out justice!

Highlight: George has to be the highlight. A Satanic Tapeworm with a thirst for murder. What is more Judge Dredd!!

I great volume of Judge Anderson stories. I really enjoyed these tales all of them which is a rare thing to write. The standout stories for me all happened to have the same artist Arthur Ranson. His art work is so detailed and let grim dark it helped to enthral me into the stories. I am actually so interested in his artwork I am going to try and get a hold of Mazeworld which he was the sole artist for so watch this space.

Ultimately I can only score this a 5 out 5 it is great. To finish this post I am leaving you with a Gorilla gunning down some Judge. Thanks for reading. 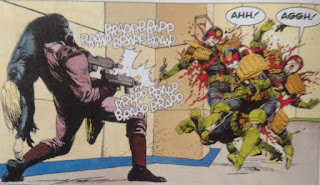 Book Review 76 // Battle for the Abyss by Ben Counter

Following on from Legion  comes Battle for the Abyss by Ben Counter. I'm pretty excited for this book as it has the Word Bearers prop...