Been on quite the Judge Dredd trip of late so I am attempting to move away from that and back into the realm of Black Library. I was lucky of late and got my hands on a Humble Bundle e-book deal. In that collection sat Primarch: Roboute Guilliman by David Annandale.

Now the Ultramarines seem to sit in the love them or hate them category due to GW using them for everything. Personally I don't mind them and have on many occasion come close to building an army of them. I am genuinely excited to see how this book plays out.

Commercial Fluff: Roboute Guilliman, the Battle King of Macragge, leads his Legion, the mighty Ultramarines, in conquest of the galaxy as part of his father's Great Crusade. Faced with an alien empire, all his dreams of a shining galaxy of peace threaten to fall into ruin...

Long before the coming of the Imperium, the realm of Ultramar was ruled by Roboute Guilliman, the last Battle King of Macragge. Even after learning of his true heritage as a primarch son of the Emperor of Mankind, he strove to expand his domain as efficiently and benevolently as possible, with the XIII Legion Ultramarines as his alone to command. Now, facing a rival empire on the ork-held world of Thoas, Guilliman must choose his weapons carefully – otherwise his dream of a brighter future could be lost forever.

It's the start of a brand new series of 18 books focusing on the greatest of heroes, the primarchs themselves. This volume kicks it all off with a tale of Roboute Guilliman at the height of his powers, leading his legion into battle at the apex of the Great Crusade.

Straight up lets get passed the obs point...yes it is a book all about Guilliman. The point of this series is to give us a closer look into the Primarchs who tore the galaxy apart on the eve of unity. If you don't know about the Horus Heresy then read up on it first. If you don't want to do that (shame), then no worries all you need to know is that this is set in a time before that. When Guilliman and his sons marched for war under the banner of the Great Crusade!

The book though almost 200 pages in length is only split into nine chapters. Before you start each chapter we are given one of Guilliman's treaties. Of courses these little captions, hint at what is going to happen in the chapter so they are worth a read. It also allows us to delve into the mind of Guilliman as he expands his art of battle, using this to build his pre-cursor to what would become the codex of warfare for the Space Marine Chapters of 40k.

Out of most of the Primarchs I only know his tale from the 40k side. Having not let reached him in the Horus Heresy novels. All I really know is he is a great leader, political genius and the creator of the chapter system. I also know most of his brother primarchs find him annoying as he is almost too good at everything, especially empire building (which I believe gets him in trouble in the 30k story arc). But in this tale we have him as a true Primarch, a fighter, a leader and a killer. And who better for him to fight against than the xeno filth of the galaxy.....ORKS.

What surprises me is the link to Lorgar (his brother) and the Word Bearers. It is due to their feud that we get some of the most interesting sections and plots of the book. We see through Guilliman's eyes his pain at the behest of the Emperor to destroy Monarchia (a city built by Lorgar), in order to teach his wayward brother that the Emperor is not to be worshipped as a God. Because of this destruction we end up with a Guilliman seeking to prove the Ultramarines are builders and not destroyers. This is a theme that comes into play in the book, as rather than orbital cleansing the ork world as his brothers would, Guilliman instead makes planet fall in the hopes of preserving the world for a future colony. 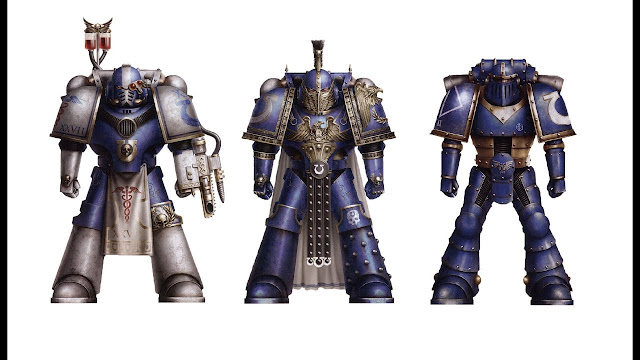 The story itself is a simple one. The Ultramarines are busy getting rid of an ork empire on the edge of the Ultramar system (their homeworld). They are seemingly on the verge of completely removing this empire from the galaxy, when they discover an infested world that once held a human civilisation. Though the humans are long gone there history and architecture remains. And with the guilt of Monarchia still hanging over him, Guilliman decides to make land fall and fight the orks rather than destroying them and the ruined civilisation from space.

The great thing about this novel is Guilliman's interactions and his personality portrayal. You get to experience his way of battle, his leadership and how pragmatic he can truly be. We even see him disliked by some of his "sons" and have doubts over his decisions! This actually gives us a character who is realistically flawed and not as sure of his actions as we are lead to believe. He is truly a human in a godlike form (lol). What this does, is to showcase him as an individual that does care about what is left to be claimed once the fighting finishes.

I have to say no big revels, it is a pretty standard battle for the Space Marines aka Marines find orks, orks get their asses kicked. It is a great way to start the Primarch series with the next book being Leman Russ which I will have to purchase very soon. Down side to this is the urge to create a Ultramarine force! Maybe I can do a killteam?

As always drop me a comment and let me know your thoughts. Or better yet hit follow.
Posted by Adventures with Peps at March 13, 2020