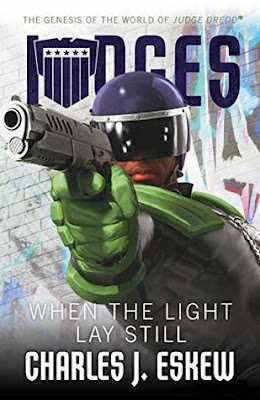 Here is the third short novel in the 2033 Judges series, ie the Genesis of Judge Dredd. So far I have enjoyed the previous two tales Avalanche and Lone Wolf, so with When the Light Lay still I will have completed Volume 1.

As far as this series goes we have dealt with small town America and big city America and how the Judges system is affecting everyone. We have also seen how it is affecting the newly formed Judges, who seem to be a lot more human than their future counter parts. But anyways less chat and more reviewing!

Title: When the Light Lay Still

Ezekiel Jones was a cop, and proud of it—until his partner shot a kid and covered it up. Ezekiel testified against her, but the inquiry went nowhere, leaving everything he’d believed in ruins. He joined the new Judges programme the next day.

Moulded and shaped to be the first of the new breed of law-makers, Jones hits the streets again. But as a new weapon gets into the hands of radicals and the tension rises, both Jones and those he serves have to decide where their loyalties lie.

Hmm where to begin. First up that title When the Light Lay Still, what on earth? I don't get it, what is the point of such a wordy title? It seemingly is not referenced in the story or has any links to it. I find this annoying among many other aspects.

This is the third tale in the opening volume and by far the worst. It had some big problems in the writing that really ruined it for me. I was very happy to be finished of it and it sadly left a bad taste in my mouth for the series.

Problems for me included the constant swearing (not needed) and the weirdly forced racial and political commentary that was just overbearing and confusing. Then the biggest issue overall was the writing style, it spent a lot of the story in the first person, making it hard to understand who's point of view we were actually reading. Add into this mix a lot of time and place hopping and it's completely a mind fuck, that constantly lost me.

Ultimately this story just didn't read or feel like the other two and it really did not appeal to me. I highly recommend avoid it.
Posted by Adventures with Peps at March 06, 2020