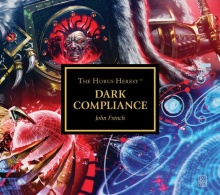 Welcome to another 30k audio book, this time it falls under #52 Herald's of the Siege. By now the Horus Hersey is in full swing, the galaxy is being carved in half by the traitorous forces and the march to Terra is underway. This is just one story of many and I am sure I will revisit the other tales soon so expect more at some point.

Commercial Fluff: For more than two hundred years, the armies of the Emperor of Mankind fought to reconquer the galaxy – led by the superhuman primarchs, the Space Marine Legions brought countless worlds back under the rule of ancient Terra. Now Horus, once honoured Warmaster and favoured son of the Emperor, has been corrupted by the whispered promises of Chaos. At his command the Imperium is torn apart by a terrible and bloody civil war, the likes of which the galaxy has never seen... As Horus’s rebellion gains momentum, more and more worlds flock to his banner. For some, it is through fear of annihilation; for others, it is out of malicious desire. Any that consider resistance are given one chance to swear fealty. To do anything other is to court disaster and worse. Accazzar-Beta is one such defier, but in bringing this heavily-fortified Mechanicum world to heel, just how far is the Warmaster willing to go and what truly is the meaning of a dark compliance? As two fleets engage across the gulf of the void, Accazzar-Beta will find out.

A rather simple tale, even though it is only a filler, it does a great job of portraying what is happening in a galaxy wracked by civil war. The tale begins with a planetary system that is refusing to bend the knee to Warmaster Horus. As the Planetary Governor faces off against Emissary Argonis of the Sons of Horus, he is informed of the demise of Accazzar-Beta, a planet that was brought to ruin in one day by the forces of Horus. Why this important? Accazzar-Beta was heavily fortified world and if it can fall so quick, how can anyone hope to survive?

This is basically a fear mongering tale taken to the extreme. Designed to bring systems into the fold without a shot fired. It shows a Horus wanting to preserve troops and resources for the final push on Terra. But it also shows he isn't an out of control killer, he is still the skill tactician and diplomat.

After the 64 minutes comes to an end I feel satisfied by the tale. Did it move the story arc forward? Nope. Does anything special happen? Nah. But as stated above it does show a side of the story we haven't seen for a while but does happen behind the action packed scenes and was well worth listening to.