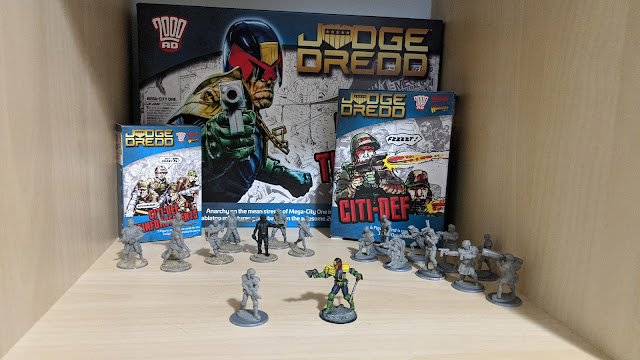 Sadly real life is getting in the way of projects so I am just going to write about my plans for Warlord Games figures seen in the above image. Up first the Judges:

Street Judge John Silar - Already finished and ready for action, as far as I am concerned this model represents myself in the setting. Not let classed as a Senior Judge but far from his rookie days, now patrolling the streets of Sector 102.

Rookie Judge (So far un-named) - This is actually my second model as I dropped and destroyed the original one!! Lucky for me Warlord Games were kind enough to send me a replacement one. I currently don't have a name for this Judge, have a good name? Drop me a comment always interested in strong names. Pretty easy back story of on final testing with Judge Silar, just wish she had a helmet on! Maybe attempt fixing the damaged one at some point and convert to have a helmet?

Street Gang - A great little starter gang. I have three options currently open to me. First up a completely unique gang that operates out of Sector 102, suggest names if you have a fun one you would like to share. This is the harder option as it requires a bit more effort from me but could be rather rewarding. The second more easier option is to make them part of The Frendz mob, which would easily allow me to add in Nero Narco at a later date. Then there is Pro-Judge Death group, basically gangers campaigning for Judge Death's release and for him to be made Mayor of MC-1! Could be a fun paining opportunity for something moody and dark. Would love to hear peoples thoughts. Personally I am thinking and leaning more into The Frendz mob idea. 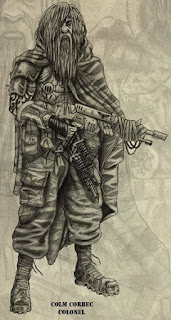 Citi-Def - The newest models to enter my collection. I am currently working on a gaming location set in the Dan Abnett City Block of Sector 102. And as is well known all City Blocks need a milita! This group I have a pretty solid plan already for. They with be known as The Ghosts and be named after different characters from Gaunt Ghosts. The idea being their leader came across an old book of Gaunt Ghosts stories and became inspired by them! This is going to be a fun project for sure and a great excuse to start re-reading the Gaunt Ghosts tales. The bearded model is definitely becoming Colm. Just need to locate and purchase a suitable Commissar model to lead from the front!

Well that was a little background guide to future projects. Thanks for stopping by and please do drop a comment if you have a similar project on the go or any name or idea suggestions.

Also if you have a Judge Dredd blog/facebook page/insta feed drop me comment and I will follow.
Posted by Adventures with Peps at February 03, 2020