Comic Review 77 // Alien vs Predator: Thrill of the Hunt 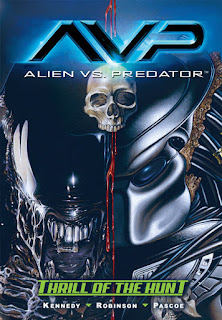 Okay, okay I know I've done a lot of Alien franchise comics of late, but I've found a treasure drove of comics at the library. I promise I will give it a rest for a bit after this one and head back into the MC-1 verses. Now this is a well thumbed novel and has seemingly been enjoyed by many, which hopefully bodes well though from the look it is a short story for sure.

Title: Alien vs. Predator: Thrill of the Hunt

Commercial Fluff:
In the farthest reaches of space, a creature terrified us. Acid blood. Armoured skin. Razor-sharp teeth. No mercy. In the depths of a rain forest, another creature hunted us. Perfect camouflage. Fearsome weapons. Brutal methods. No conscience. In 2004, these monsters clashed on Earth in the greatest battle the universe has ever known. But far in the future, long after a technological catastrophe that started a second Dark Age, all memory of these two species has been forgotten. And when Mankind again reaches for the stars, we will discover that, truly, those who cannot remember the past are condemned to repeat it. Once again, Man is caught in the middle of a deadly struggle. 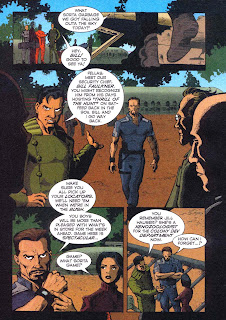 Hmmm. Definitely a weak showing from this novel. Felt like we jumped back to the 80's with the artwork. Very flat with line work with a basic colour palette as well. Seriously what is going on? I thought this comic came out in 2004. Have I missed something? A bit disappointing for sure.

The story itself isn't much better, feeling like a 80's action movie. It lacks meat to the story, it just comes across as a flat, violent comic. It also suffers from lack of pages as you don't really get to know the characters enough to care and they end up being more of a background piece on a planet with Aliens and Predators. Whilst we talk about them, why are these two races here? Why aren't they fighting more, why bother telling this pointless tale?

To be honest this was a disappointment. As I've mentioned before I don't expect high brow scifi but I do expect a plot of some sort beyond hey we are all on the same planet. Please avoid this tale and spend time doing something important like watching paint dry.

You have been warned.
Posted by Adventures with Peps at February 25, 2020