Comic Review 76 // The Case of Dexter Ward by H.P Lovecraft 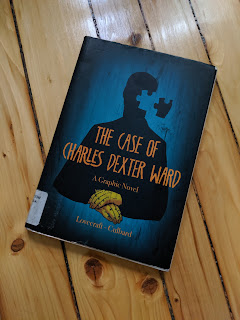 Wow half way through February already. Not going to lie there has been a lot of sci-fi graphic novels so far this year (not a surprise considering it's my preferred genre). But for this post I decided I should mix it up a little and go for a cosmic horror instead! So let dive in with this library find and see if the horrors of existence will claim our minds and souls.

Title: The Case of Dexter Ward: A Graphic Novel

Commercial Fluff:
Providence, Rhode Island, 1928. A dangerous inmate disappears from a private hospital for the insane, his method of escape baffling the authorities. Only the patient's final visitor, family physician Dr. Marinus Bicknell Willett—himself a pece of the puzzle—holds the key to unlocking The Case of Charles Dexter Ward. A macabre mixture of historical investigation, grave-robbing and bone-chilling revelation, this adaptation artfully lays bare one of H.P. Lovecraft's most horrifying creations.
"The New York Times" best-selling comics writer, Brian Wood pens an epic space odyssey filled with gritty, fearless art by up and coming artist, Tristan Jones. Aliens Defiance #1-6. 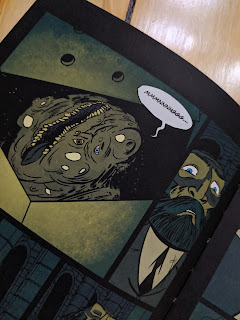 What a great story. I haven't actually read the short story this is based off, but it is now on my radar for sure. Unsurprisingly the story is about Charles Ward, a medical student of some intellect who drops out of school and social circles to investigate his family origins. This path of obsession ultimately leads him to discover Joseph Curwen an alchemist and accused wizard!

Soon Charles Ward's own family worry for him and involve Poe a psychological professor and friend of the family. Here the story becomes more of a detective novel, as Poe attempts to track down the elusive Charles Ward. We are treated to all manner of occult mysteries as you would expect from a H.P Lovecraft tale. And we also delve into how far Poe can be pushed before going mad himself!

The artwork is very unique in my opinion and really adds to the tale and the retelling seems to flow nicely and make senses. It definitely delivers on the horror front and is a pretty creepy tale, even though you can workout the ending about half way through.

Overall a fun solid read and one I would be happy to add to my collection.
Posted by Adventures with Peps at February 18, 2020