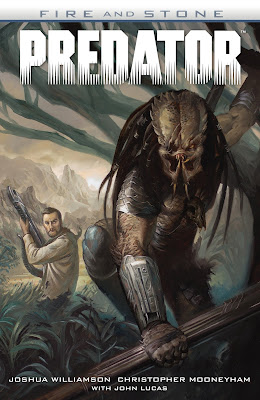 Fire and Stone is a scifi Dark Horse comic series linking Prometheus, Aliens, Aliens vs Predators and Predator into one big adventure. So far the series has been a bit hit and miss for me. Pros so far have been the artwork, whilst the actual story has proven to be the weak link. I am hoping part four - Predator will actually tie all the stories together. Let us jump in and find out.

After the terror of Weyland-Yutani's disastrous mission to the site of the fallen Prometheus, the Perses begins her long journey home, but an invisible stowaway forces the crew into a deadly conflict! While the crew defend themselves against this unseen predator, the hunter itself stalks a much more substantial game! 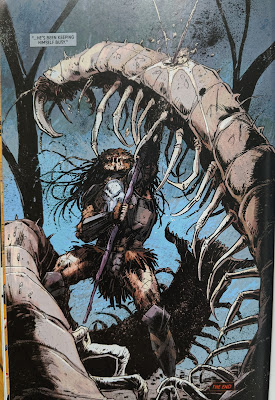 As mentioned at the start Fire and Stone: Predators is the fourth and final volume of this hit and miss series. What is good about this one is that it expands on some of the characters and helps grow out the backstory. This actually makes these characters likeable and even makes the comics seem like they are linked and not stand alone pieces, with weak links.

This tale picks up on the story of Galgo, a rather believable rogue character, who is purely out for himself. In this issue it really plays into survival instincts and his utter willingness to sacrifice everyone if it means he lives an extra five minutes. Unlucky for Galgo his luck is starting to run out as he gets stuck with a very likeable Predator.

With the Predator now leading the way this unlikely duo head back to LV-223, to hunt a deadly prey an Engineer!

This is a solid ending to the series. For me the strongest issue was the Prometheus issue, closely followed Predator. The weakest issue for me has to be the Aliens vs Predator issue. But overall I am glad it has come to an end. The true highlight of the series was the artwork with Prometheus once again leading the way.

If you are a fan of the franchise I recommend picking them up, but if you only have a passing interest I recommend seeking out a different tale.
Posted by Adventures with Peps at February 11, 2020