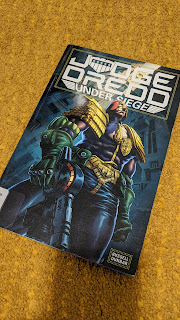 Felt it was time to head back into the Mega City and catch up with Judge Dredd once more. This time it is an IDW tale and one I haven't heard of before. As with a lot of my comics of late I found this one in the local Library. So let's not mess around and head into details drokk heads:

Tense, gritty action as Judge Dredd keeps law and order in the chaos that is Mega-City One.

When all contact with the Patrick Swayze Block is lost, Dredd and Judge Beeny are tasked with investigating. As they battle lawlessness and rampant criminality, they discover a threat to the city that they must contain at all costs... 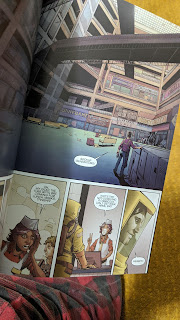 Okay I will be the first to admit that this is a good read. A lot of the time IDW misses the mark for me but not on this tale. This read like it could have come from an issue of 2000 AD.

The plot is straight forward enough; Dredd is sent into Patrick Swayze block to help locate Judge Beeny. Inside the block he discovers Muties have discovered an entry point and are laying siege to the entire block. Realising the two Judges can't face the threat alone, Dredd and Beeny are forced into an uneasy truce with the local crimelord known as the Mayor. This story is a great social commentary of how communities are being forced to look after their own, as an uncaring system abandons them on a daily basis. The artwork is great and really shows off the insides of a block and has given me lots of ideas for my gaming table build which is always nice!

Main negative for me was the page count. At 96 it felt like it could have been even better with another 20 pages. But overall this a great read and I would happily pick up a copy for my collection. 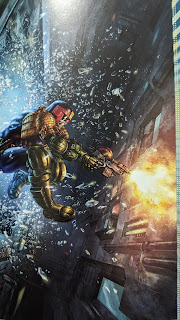 Posted by Adventures with Peps at February 04, 2020