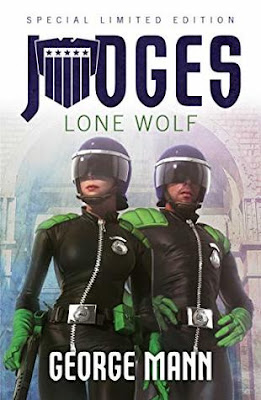 See I told you I was hooked to Judges. After reading the Avalanche I knew I had to pick up book two Lone Wolf in the Judges series. For this tale we leave small town America and head to the big city New York. Not only do we now start seeing how the system works, but we also start to see the political fall out of it all. Here are the details:

Commercial Fluff: UNITED STATES OF AMERICA, 2034 A.D.
Eustace Fargo’s Judges have been on the beat for a year. Crime is down but tensions are high between police and Judges, and millions rail against the radical new laws.
A summary execution sparks a crisis: only the killer knew where his last, still-living victim was hidden.
With the largest storm in decades brewing off the East Coast and a city about to erupt into violence, can Judges Ramos and O’Shea find him in time?

It's 2034 and the Judges system is starting to take root throughout America. But not everyone is keen on the new system, especially the Governor of New York State. But even in the biggest city New York itself, it seems Judges and Police are starting to work together for greater good. That is until a serial killer is executed by a Judge after surrendering to the police.

At this point the story ramps up, with a possible victim still alive and no one left to question! The Judges are thrown on a back foot as they rush to find the possible victim, before all chaos breaks lose in the city as a giant storm heads in from the coast. Into this mix throw in protests, a breakdown in department relationships and an early look at a mega block and you are left with a thrilling short story.

Would have loved for it to be slightly longer, but given such a low page count Mann was able to really squeeze in a lot to this tale. I loved how the Judges especial O'Shea were very human and not the straight cut Judges of the future. I also enjoyed how the story would jump from the Judges to the victim and add a real sense of urgency. It also left me guessing all the way to the end and truly surprised me with the outcome.

This Judges series is truly impressing me. I wasn't sure when I first picked up the book but I am finding myself absolutely hooked. Now to read the third novel When the Light Lay Still.

Posted by Adventures with Peps at February 28, 2020