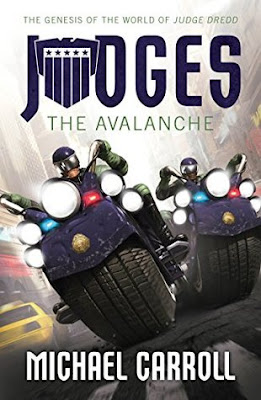 Welcome back readers, this week I am actually starting a new series of books called Judges. Created by 2000 AD, Rebellion Publishing and Abaddon Books, the series follows the genesis of the Judge system that would ultimately lead into the World of Judge Dredd.

This is an exciting idea as it set in 2033. Only thirteen years into our future. What does that mean for the reader? Well it means not to much has changed in the world, the cities are all the same ie. no mega-cities, there hasn't been a war yet so no Cursed Earth or high pollution. What is happening though, is a United States of America struggling to handle crime, we are starting to see a big divide between the rich and poor, corporations are taking root and pushing out the little man, the idea of a mega block is starting to be formulated to rise up in cities like New York. The general populace is on a knife edge ready to riot over anything. And into this heap pile the new Fargo Judge System is being unveiled. How exciting!

As I write this I have complete book one The Avalanche and I am nearly finished book two and I am liking how the stories are being portrayed. It's not from Fargo's view point or some high ranked figure. It is instead the view point of the first Judges. The people on the front lines and how everyone including the Judges have to get on board with a new changing Justice system.

Commercial Fluff: UNITED STATES OF AMERICA, 2033 A.D.
In a time of widespread poverty, inequality and political unrest, Special Prosecutor Eustace Fargo’s controversial new justice laws have come into effect.
Protests and violence meet the first Judges as they hit the street to enforce the Law; the cure, it’s clear, is far worse than the disease.
Is this a sign of things to come?

Yep. This series has peaked my interested for sure! As I ready mentioned America is on the brink of chaos, the rich are getting richer and crime is on the rise. A man named Fargo has risen in political power and has convinced the President that the police system needs changing. They need a force who can step in and beat back crime. This system is the Judges, a force able to do all aspects of the Justice System from investigating to dispensing the sentencing. These new Judges are being drawn from across all professions be it law enforcement, military and legal. They are the future of law enforcement and they are ready to hit the streets.

But this story isn't set in some big city giving us access to melting pot of chaos, no instead we are in the small town of St. Christopher. Not the nicest place to live but also not the worst. I imagine it as a factory/industry town that has lost most of it's trade and is slowly becoming rundown and derelict. We all know a place like this, a place that once was the place to live and now is just a few stores and some empty warehouses, full of low income families forced to live below the poverty line.

Into this back drop we get a lone Judge arriving a day earlier than her squad because she has family there and after a cold welcome by her brothers at the police station, she rides off alone into the night. This is the last we see of her as she is murdered! The next day the rest of her team arrive lead by Judge Deacon and their first case in this new town is to investigate their team mates death. Faced by police force closing ranks and a general populace who have yet to come to terms with the Judge's system the team will have a hard time fitting in.

This really was a great intro into this new series. We see how the system will ultimately work once up and running but that is at least five years away, until then the Judges have to work along side the police force they will ultimately replace. We get to see also the new mindset for the system, it is going to be brutal and bloody. If you break the law expect to have justice served.

Though a short tale it is amazingly written and very enjoyable to read. If you have any interest in Judge Dredd than I can't portray strong enough why you should read this. It is great. By the time you read this I should have finished Judges - Lone Wolf so watch out for that review soon.
Posted by Adventures with Peps at February 21, 2020