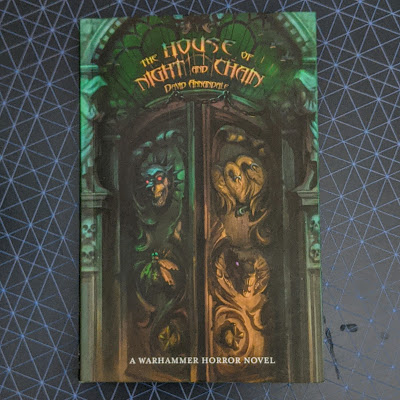 This was an interesting tale to dive into as it is kind of a jump outside of my normal reads. As I am sure you have guessed by now, I love sci-fi action a lot. Yes I've delved into fantasy or history but they are still action based novels. So to head into a horror themed novel was a exciting change. I did play safe a stuck to Black Library for it and the setting of Warhammer 40k, but what can I say apart from better the devil you know.

Title: The House of Night and Chain

Commercial Fluff: In a bleak corner of the city of Valgaast, the House of Malveil awaits. A place of darkness, its halls throb with a sinister history. Its rooms are filled with malice. Its walls echo with pain. Now it stirs eagerly with the approach of an old heir – Colonel Maeson Strock of the Astra Militarum has returned home to his ancestral mansion. He is a man broken, both by the horrors of war and by personal loss, and he has come home to take up the mantle of Planetary Governor. He hopes he can purge his home world of political corruption, and reforge connections with his estranged children. He hopes he can rebuild his life.

Malveil will feast on these dreams. Strock believes he has seen the worst of the galaxy’s horrors. Malveil will show him how wrong he is.

I'm glad this is my introduction to Warhammer Horror. What an intriguing tale, weaved around Strock and his family. Strock is heir to the governor's seat but first has to serve in the Astra Militarum, whilst his ageing uncle wastes away in Malveil as the current governor.

We then skip forward a few years (possibly 10-15 years) the uncle has died and Strock is still off world, leaving his wife to set up in the abandoned Malveil alone. At this point the pace picks up with Strock's wife passing away, and Strock being seriously wounded fighting the Tyranids. It is following his recovery that Strock returns to Valgaast and follows in his wife's footsteps and sets up in Malveil and here the story starts proper.

Brought back to Valgaast in hopes of turning the planets corrupt ruling around, Strock finds himself in a political hotbed of lies and distrust. This aspect of the story is actually really good. I could have happily read a political novel in this setting and what Strock as he takes on the corrupt elements of his homeworld.

But like a true horror the main story all takes place in the creepy house at night. With our main character exploring the abandon rooms and hallways of Malveil. The chapters focusing on this aspect were some of the best in my opinion as it leaves you fearing the shadows and constantly feeling the need to look over your shoulder. Made even more scary as read most of this book in bed. As the house chapters continue Strock finds his late wife's personal diary and attempts to retrace her steps through the house ultimately leading him into a dark mystery as the truth unravels more and more.

Though a some what obvious ending it was still hugely satisfying to see it reach that point. I can only speak highly of this novel and I am excited to read more horror tales from Black Library. Let me know your thoughts in the comments below or better let give me follow!
Posted by Adventures with Peps at February 14, 2020