Beer Review 83 // Rye Guy by Beyond the Pale 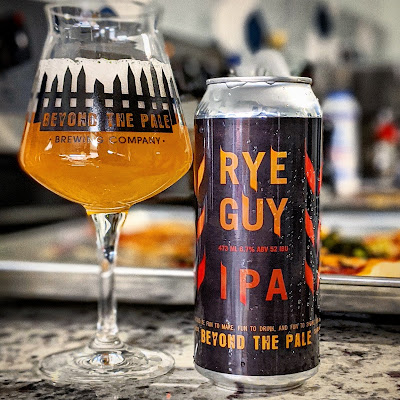 Now it shouldn't be a secret that I enjoy beer, but why? Well the big reason is I work for a brewery here in Ontario. Which brewery you may ask? Well I work for Beyond the Pale, yep the same Beyond the Pale we are beer reviewing today. What does that mean for the review, well not a lot to be honest. I will still write my true thoughts as the owners respect honest over everything, so let's dive into this beer.

Brewery: Beyond the Pale Brewing Company

Commercial Fluff: Rye Guy one of our original beers when we first opened in 2012. This IPA showcases everything that is great about a West Coast style IPA. The American Hop profile gives it a distinctive citrus and pine notes flavour made even more impressive by the ton of rye malts we added as part of the all-Canadian grain bill.

The result is a crisp, full-bodied IPA that is surprisingly session-able during spring, summer, autumn or winter.

Pour: A light hazy orange pour with a crisp white head, that dissipates to leave a good lacing on the glass as you drink it.

Taste: Easy drinking with the citrus and pine notes upfront. But as you continue to drink a slight lingering spice builds on the tongue from the rye character. It also has a bitterness that though not overwhelming lets you know you are drinking and makes you take another sip.

Would I buy it again: Yes. It is a staple in my fridge. It is always a good one for sharing as well, it show how a good IPA should taste and it helps remind people that it doesn't always need to be a North East IPA.
Posted by Adventures with Peps at February 19, 2020