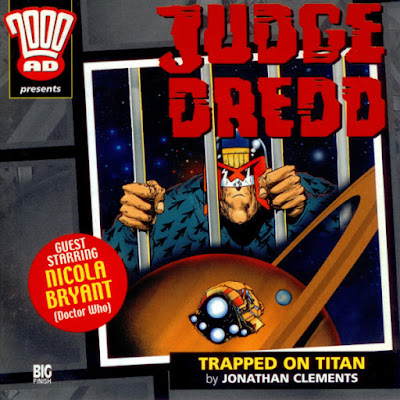 Time for a quick audio book review. Once again it is a Big Finish production about Judge Dredd. I truly love these dramas, but they are becoming increasingly hard to find. I really hope Big Finish will one day release them once more. If a generous follower has audio and wants to share I would to chat.

Commercial Fluff: It's the most hellish place in the Solar System - a prison for the Earth's worst criminals. Now Titan is under new management - a cabal of two-faced spin doctors intent on bleeding the inmates dry.

But something is out there on the freezing plains of Titan. For thirty years, people have committed murder to keep it quiet, but now its secret has escaped. Time is running short for Titan, and Dredd alone can stop the killing.

The future of the Earth is at stake, and Dredd must go into the prison undercover. He must walk among serial-killers and mass-murderers to find the answer to the puzzle, before he spends the rest of his life Trapped on Titan! 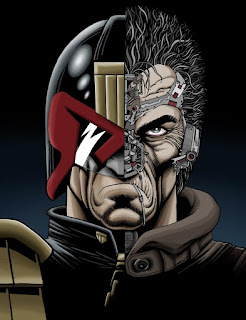 One of the darker Dredd stories in this series so far. Following the death of thirty prisoners, MC-1 sends Judge Mordin and an undercover Judge Dredd to investigate. Their main goal was to decide if the Titan Governor was corrupt, their secondary goal was to discover Rico's Rock (yes Dredd's Brother Rico). During this adventure the Governor shows her true colours and attempts to kill Judge Mordin, setting in process a full lockdown which leads to riots lead by the Grudfather.

It's during this mess that an alien warfleet approaches readying to attack earth on Rico's command. The only way to save earth is for Dredd to pretend to be Rico and communicate with the aliens. Ultimately earths destruction is avoided but at the cost of the prison. Rebuilding will take time but ultimately it was worth it.

Actor Toby Longworth once again brings Judge Dredd to life and the script writing was perfect with it's in jokes and perfect 2000 AD humor. It is the perfect tale and an excellent listen for sure.
Posted by Adventures with Peps at February 27, 2020