Welcome to an exciting new project I am undertaking. To coincide with the Warlord Games - Judge Dredd miniature game, I have decided to build a gaming. But no ordinary table, this will represent the inside of Dan Abnett Block located in Sector 102. For those not up to date with my blogging; Sector 102 represents my corner of MC-1. It is rarely mentioned in the comics and so gives me great freedom for creativity.

In the comics especially the older ones, city blocks normally were named after celebrities or people recently in the papers or news. For me Dan Abnett is one of my favourite Authors and comic book script writers. So it just felt right to have a block named after him. What it does mean is that I can combine a couple of loves into the setting. So expect things like the Cit-Def being known as the First and Only led by the ruthless Commissar Ibram. There will be a gang known as the Bluebloods and the Private investigators Eisenhorn and Ravenor for hire. But this is just the iceberg of ideas I am brewing. 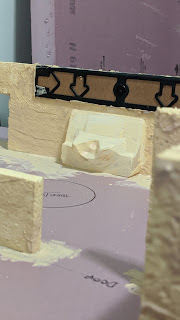 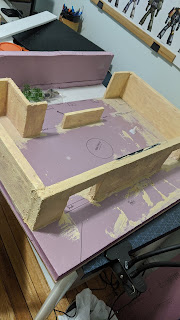 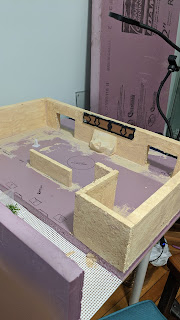 But back to the main point of this post. I am starting work on a gaming table that will be made up of 2'x2' sections. The first 2'x2' will be the shopping arcade. The base is made from a thin layer of wood topped with pink insulation foam. This gives me a nice light weight base to build off. The next job was to build some walls to give me a basic skeleton, once these were in place I covered them in filler to give them an added strength.

As you will see I have nice entrance way that can lead to a more street style section in the future. I then have a wide open open plaza space. Whilst the far wall (the non plastered piece), will quickly become shop fronts, expect a Ugly Clinic, a kidney hut and a Luke Warm Topic in the near future. I am also thinking of creating a central statue in the plaza using the the Dredd vs Death figure, to represent a memorial to the Necro days. But the real issue I'm stuck on is what colour to paint the mall? Do I go standard grey and rely on the shops to add pops of colour? Or do I go brighter and more colourful and give it a richer block vibe? Would love some thoughts on it, if you would like to share some than drop me a message in the comments.

From this base I hope to build off it, adding a second level that would lead into the other boards. Maybe even make shop interiors. But for now I want to concentrate on this one section first. Next step is the flooring followed by the statue and some clutter around the locations.

If you want to stay up to date on this project make sure to click follow to stay in touch.
Posted by Adventures with Peps at January 06, 2020