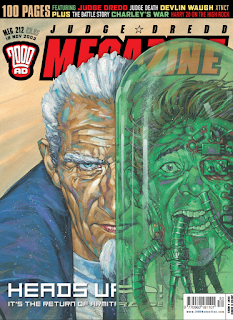 Now hitting November 2003! What a time to be alive a whole 16 years and two months ago. God damn I would of been 20 at the release time of this. Straight out of the bat I am excited for this issue as the cover is dominated by Armitage, second only to Dredd in my opinion. Armitage is holding a head in a jar and I am super intrigued to see what on earth is happening!

Story: Judge Dredd: Strum and Dang (Part 2) - Dredd, Koburn and the Rookies are seriously outnumbered and gunned. After fleeing the battle to a local ghost town, Dredd is wheelchair bound after taking a shot to the legs. Now the role of leader falls on the shoulders of Koburn.

One of my favourite parts is Dredd rolling out of a hab unit in his wheelchair to blow up a tank. Only Dredd could pull that move off. 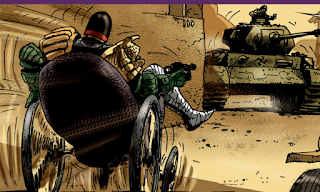 Story: Judge Death: The Wilderness Days (Part 4) - Judge Death has finally reached a centre of civilisation in the Cursed Earth, Las Vegas. Here gambling is the law and the town is rife with crime and gluttony.
After being arrested for killing a citizen, Judge Death is lead to be judged by the God-Judge (think Godfather), here Judge Death strikes a deal with the mafia boss. Work 10 nights in the boxing ring in exchange for details of weapons of mass destruction!

As always the art work is dark, highly detailed and beautiful! The above image is the perfect example. Just look how gloomy and dark the Judge looks. Love it! 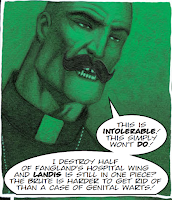 Story: Devlin Waugh - Red Tide (Part 11): We are still running and being chased! What is that 4 issues so far? Come on this tale started so strong and since then it's just become a massive chase scene. Plus side we have finally reached the hold cell of Lilith and hopefully are actually reaching a point to the story.
As always the artwork is great and Devlin gets some great lines.

Story: Harry Twenty in the High Rock - Story is starting to pick up finally. Harry, Genghis and Old Ben have finally escaped the Rock and landed on Earth. Only issue is it seems just a dangerous down here!

Story: Charley's War - Pretty straight forward tale set in the WW1 setting. It's a harmless enough tale but doesn't excite me. So let us just move on.

Story: Xtnct (Part 4) - This story is dieing rapidly! What I thought was going to be a real cool story is just turning into a dull read. Though the artwork is brilliant and the social commentary is fun, I am just finding it a real dull read so quick as I can, I will move on. 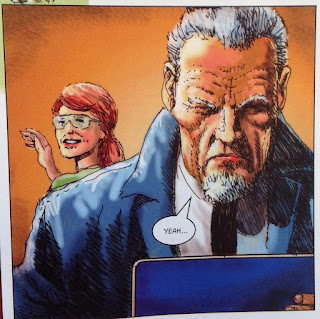 Story: Armitage - Apostasy in the UK (Part 1): Armitage and Steel are back. There seems to have been a string of murders with the the mutilated bodies laid out in some form of religious symbolism. Now the only real issue is how to workout which religion as they were all band in 2057, and no one remembers much info on them. The tale ends with Judge Steel being jumped by four religiously robed people. I can see this becoming a race against time with Armitage rushing to the rescue.

This tale is filling me with hope, beautiful art, interesting story and one of my favourite characters....so I am here with fingers crossed.

Story: Apocalypse Soon: The Four Horsemen of the Apocalypse have arrived in Casbah and the city has changed since they last visited! Barely into the town the group is confronted by a suicide bomber and blown to bits!! Local military units are then called in to support. I am excited to see what happens next.

Wow what a hit and miss issue. First two stories great, then a nose dive for four tales and then finish strong for the last two tales. This is exactly a 50/50 split issue. I am extremely excited for the Armitage tale to continue and I wonder what Dredd is getting up to next.

As always thanks for joining!
Posted by Adventures with Peps at January 30, 2020