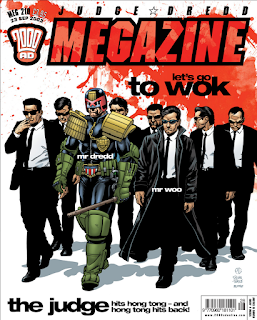 Welcome back to another Megazine review, hitting the big 210. Which was released in September 2003. The cover is striking with the bold red blood splatters and the rip off of Reservoir Dogs. Can't wait to see what happens in this issue with Mr. Woo and Hong Tong. 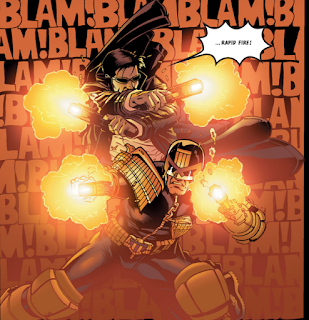 So unsurprising there is no new tales in this issues. We have Judge Dredd - Hong Tong Part 2, Judge Death - The Wilderness Days Part 2, Devlin Waugh - Red Tide Part 9, Xtnct Part 2 and The Bendatti Vendetta - Blooded Part 2. Let us jump in and enjoy the issue.

Judge Dredd - Hong Tong Part 2: Holy crap so much action in one strip. Judge Dredd and Mr. Woo finally team up in the ultimate shoot out. So many blam, bdam and daks, in so few pages is crazy. The story pretty much wraps up in a straight forward way, with the criminal captured and a body count that would make a serial killer blush. But of course Dredd can't just leave this alone, and bluntly tells Mr. Woo to book a flight to MC-1 so they can have a rematch, but this time to leave his diplomatic protection next time. Another highlight for me was the Sino-Judges, how on earth do they catch anyone with those crazy ass helmets! 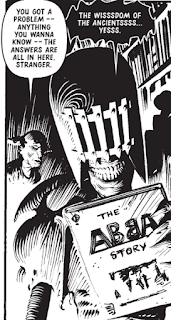 Judge Death - The Wilderness Days Part 2 : Judge Death is slowly crossing the Cursed Earth bringing his form of law to the lawless. In this tale we see a different side to Death. We see a side that is troubled and seconded guessing himself and his purpose. That is until he meets a blind mutant who lends a friendly ear. After Death states his concerns the Mutant still not realising the being is Death, shows him to his special mine, a book mine. With a whole library at his finger tips Death rediscovers new ways to the kill the guilty and is reborn with a new passion. This is a fun tale as we get to see a different side to the superfiend, which we rarely if ever seen.

Devlin Waugh - Red Tide Part 9 : The constant running and being chased is starting to wear thin for me, I get what they are trying to portray but come on! Let's get moving with this tale I want to see where it is going. As always the artwork is gorgeous and a true highlight of the strip.

For me this is the most dull part of the meg, with the WW2 Darkie's Mob strips and then Harry 20. I got to be honest and say these do nothing for me and though I read them I don't want to waste time reviewing them. Let's just move on and hope they end soon.

Xtnct Part 2 : Having officially gone the team are seeking a way to bring down father and get their revenge on the last human. For reasons unknown the team are heading towards an underwater sea fortress containing research scientists cloned from the original founders of the lab. These scientists have discovered a virus that would affect all life but would only kill humans, their goal is give earth a chance by killing those who cause the most damage. Unfortunately this doesn't fit with the teams plans, so they capture the base, killing all inside and destroying the virus. What is the team planing?

The Bendatti Vendetta Part 2 : Following on from the killings of the first issues, the story jumps forwards and we finally start getting some details. The assassin of part 1 is called Faulkner and it would seem the woman who saved him is part of a vigilante group called the Bendatti. An underground group who fight the criminals the normal justice system can't reach. I can see this becoming a full on vigilante strip with some double crossing happening down the road. Either way I am excited to read more of this strip.

Apocalypse Soon: The horsemen of the Apocalypse have finally caught up to their steeds and are back on track to starting the end of the world. Only issue is the US government are watching them and if any apocalypse is going to happen it will be on the USA's terms. Considering these are one page stories I am really enjoying them and can't wait to see where it is all going.

And with that the issue is at an end. Got to be honest this is a 50% mix of enjoyment and boredom. Highlights include Judge Dredd, Judge Death, Xtnct and Bendatti. Low lights shockingly include Devlin which is becoming stale and the entire Gold Section, I am finding that part so pointless and dull.

Would love to hear your thoughts on this. SO drop me a comment below. Until next time enjoy some Sino Judges!

Posted by Adventures with Peps at January 16, 2020