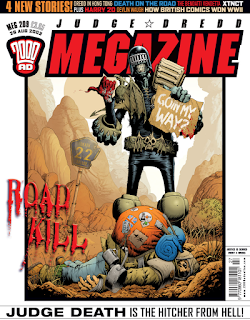 Following on from last weeks return to reading my Judge Dredd Megazines I have decided to push on and read more from 2003. The cover straight away is eye catching with a beautiful image Judge Death thumbing a ride through Death Valley, with a hitch-hiker dead at his feet. I have to admit early on I am very excited to see what this tale is all about. This also seems like a good jump on week with four new stories starting.

Judge Dredd - Hong Tong (Part 1) - Following a massive shoot out in a dive bar in MC-1, Judge Dredd discovers known perps are travelling to Hong Tong to get complete body mark overs. And is soon headed to Hong Tong to investigate. Highlight of this strip comes in two parts. One is Hong Tong itself, a city of two cultures split between Brit-Cit and Sino-Cit making it a hotbed of cultures. Two is Inspector Liu Chan Yeun aka Johnny Woo a known hitman and Enforcer for the Triads, who has met Dredd before! This is a great opener, with action, old grudges and a new to me location to enjoy and investigate. Excited to see where this goes.

Judge Death - The Wilderness Days (Part 1) - Not sure the background to this tale or even when it is set. All I know is Death is for some reason wandering the Cursed Earth! The real eye catching part of this tale is the artwork, Frazer Irving has really created a dark and moody experience for me which adds volume to the tale. Highlight for me is how Wagner has made the super-fiend seem vulnerable. Due to the low tech nature of the Cursed Earth, Death can't take risked like he did in MC-1. Lose his body out here and he may not be able to find a new host! Excited to see where it leads but would love some background as to why he is there.

Devlin Waugh - Red Tide (Part 8) - By far my favourite strip in the previous issues. The story continues but actually seems to be ramping up to something big. The action is still gory and Devlin is still dishing out tongue bashing's left and right (which I love). But it does finally feel we are heading to the conclusion of the tale and look forward to seeing how all the pieces come together. Highlight is still Devlin and the samurai sword, it's just such a bad ass look!

Harry Twenty on the High Rock - A bit of a classic 1980's sci-fi adventure. Harry is sent to the High Rock, a orbital space station that is home to some of the roughest prisoners around. As soon as Harry arrives he is already making plans to escape, but can he survive the guards and the other inmates? Nice enough tale but a pretty straight forward tale. Seems to be the first half of the adventure and I guess the second part will be in 210?

Darkie's Mob - I still struggle with these adventures! Never really got into these WWII tales as a child. They just don't hold my interest, so let us move on.

Apocalypse Soon - The four Horsemen of the Apocalypse are still trying to find their horses and have arrived at the sex cult camp. Death after dropping acid sees a glimpse of a fun future and starts early on killing people! As always beautiful artwork, but I feel they should give it an extra page or two.

Xtnct (Part 1) - In an alternative future mankind in on the brink of extinction. With only 200 people left alive on earth and seemingly owing allegiance to a Tyrant known only as Father. In this opening tale it would seem on colony of 6 people has attempted to go it alone. Father in classic Tyrant style decides to wage war on the colony to regain control of them. It would seem the different colonies have grown or cloned creatures to fight for them. Father for example seems to like dinosaurs, whilst the rogue state likes bears. By the end of the issue one of the dinosaurs has over stepped this programming causing Father to turn on them and attempts to kill them! I see this becoming a comical revenge tale and I am excited to see were it will go. 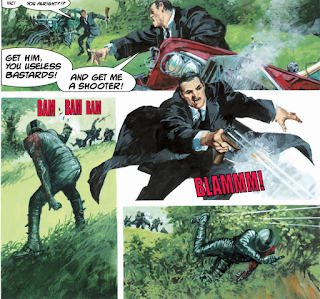 The Bendatti Vendetta - This is an interesting tale as it is set in 1999 Britain and follows at least one British mob and some corrupt police. The piece starts off at a funeral and has a mob boss chatting with a corrupt cop about all the latest killings, and how they are possibly linked to a job gone bad in Richmond. It's at this point a biker attacks the car causing a crash and killing the cop. Facing off against the Mob boss the mystery biker is injured and flees the scene before being picked up by an unknown female character. I'm interested to see where this goes as I like a good mobster tale.

And with that this megazine is over. Overall it was strong showing, with every tale apart from Darkie's mob gaining or holding my interest. I am definitely excited to continue reading the megazine.