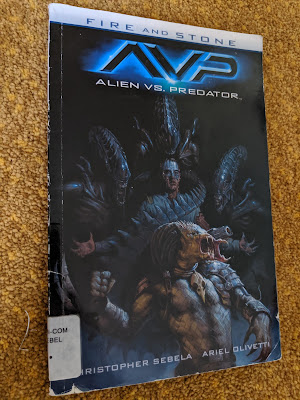 Okay so the library was quick this time and I was able to go straight in and pick up part three of the Fire and Stone series. Please take a moment to check Part 1 Prometheus and Part 2 Aliens if you haven't already. Of course this is a continuation of those that went before and though the plots are a bit muddled I am enjoying the artwork. Let's see if this continues into this tale.

Commercial Fluff: As the mercenary crew of the Perses leaves the horror of LV-223 behind them, one passenger reveals a terrible new danger and the crew soon find themselves in a deadly struggle between predator and prey! Collects issues #1-#4 of Alien vs. Predator: Fire and Stone!
Aliens, Predators, and Engineers will come together in 2014 when the Aliens, Predators, and Aliens Vs. Predator comics get completely rebooted, along with the first Prometheus comic series, and joined together in a single continuity. 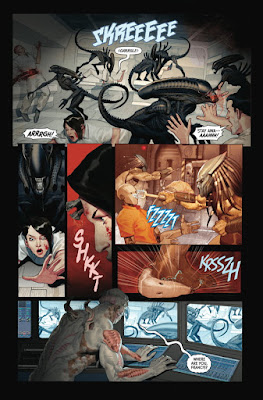 Okay got to be clear early on the plot has crashed hard, real hard. I feel they lost their vision completely in this issue and have just started throwing things into the mix to see what would stick.

AVP: Fire and Stone continues the story started in Prometheus. Elden the synthetic droid injected with the black goo has now completely mutated and is on a journey of working out his place in the universe. All the while attempting to hunt down the man who infected him. This leads us back to the Geryon ship which is now heading back to earth.

It's during this period that the Predators finally show up and the battles start. We have a whole three way happening of Preds vs Aliens vs Humans and as you could imagine we are left reading pages of gory scenes, once again I feel the gore is a bit over done. Sometimes less is more.

A highlight for me once again is the artwork. Though the gore scenes are over used in the tale, they are actually beautifully brought to life by Ariel Olivetti. And even Elden looks like a creature that could exist in a truly messed up world.

Lowlight of the tale is Elden. I'm board of him struggling to find himself and his identity. I'm also really board of Francis who should have been killed off a lot sooner.

Overall read for the artwork and try not to get wrapped up in the dubious plot of the comic. Only one volume left to go.

Have you read this? Drop me a comment and follow too see more comic reviews.
Posted by Adventures with Peps at January 28, 2020