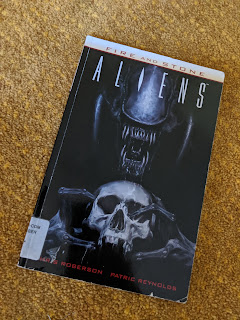 Been a while since I read Fire and Stone: Prometheus. But here we find ourselves delving back into the series as the comic became available via the library. I highlight recommend checking out the first review to refresh yourself on my first thoughts of the series. Then come back and see if issue two is an improvement.

Commercial Fluff: Directly tying in with the Prometheus and Aliens films, this excursion into terror is not to be missed!

An unlikely hero tries to save a small group of researchers and miners from the doomed, deep-space Hadley's Hope colony--which is now infested with vicious xenomorphs! Terraforming engineer Derrick Russell takes control during an outbreak of aliens and leads his desperate survivors onto the Onager, a rickety mining vessel. This role is new to Russell, as are the horrors he and his crew will face both in space and on the strange planet they crash on. 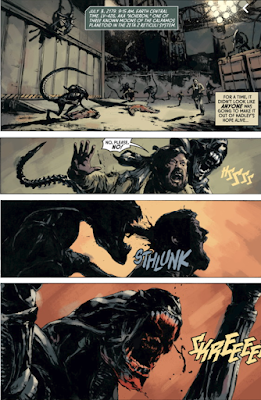 This is part two in the Fire and Stone Series, but you need to understand it is actually the prequel to the Prometheus issues. Which is a little confusing and strange way to go about the series. Up first the artwork is beautiful and sucks you into the tale and makes it worth the cover price for the artwork alone.

Story is pretty standard as seems to be the case with Xenomorph titles. Where this changes a little is the fact that it ties into the Aliens movie. Set on LV-426 we see some of the colonists dealing with the infestation that the marines end up dealing with. A hand full of survivors manage to escape off world using a rundown ship called the Onager  and escape to LV-223.

It's soon discovered they didn't arrive alone and the group fee into the jungle to escape the xeno threat. Here the shit hits the fan with the group coming under constant attack and the discovery of black goo as well. The story is definitely a bit confusing at times as the black goo can seemingly mutate and alter DNA and the whole piece ends on a cliff hanger that I can only assume is answered in either Aliens vs Predator or the Predator issue.

Worth the 30 minutes of reading for the eye candy alone. Now to find the next issue. Have you read the series? Let me know your thoughts below I would love to hear it and I guess I really need to rewatch Prometheus and Covenant again as I find the whole black goo confusing.
Posted by Adventures with Peps at January 21, 2020