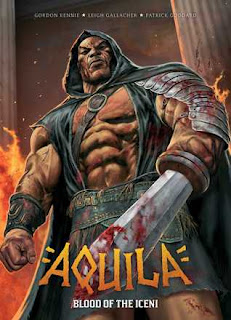 Sometimes you are just browsing an isle at your local library when something takes you by complete surprise. This happened to me when I saw the tale tell sign of a 2000 AD comic. I was expecting a Judge Dredd tale to appear before me but instead found it to Aquila. Aquila is a tale I have own seen and read a few times pages off. With it seeming set in roman times and leaning heavily on fantasy. So with such little knowledge I thought it would be the perfect read.

Commercial Fluff: He was one of the rebellious gladiator-slaves crucified by the Romans for being part of Spartacus's uprising, and in his dying moments he called out to the gods for vengeance. Something heard him, and brought him back from the dead in exchange for his soul.

He is Aquila, and he is now the unstoppable instrument of Ammit the Devourer, who hungers for the souls of evil men – and Aquila will cross the Roman Empire, from Londinium to Jerusalem to Rome itself, to feed her until his debt has been paid! A stunning historical fantasy from writer Gordon Rennie (Rogue Trooper, Dept of Monsterology) and Leigh Gallagher (Judge Dredd). 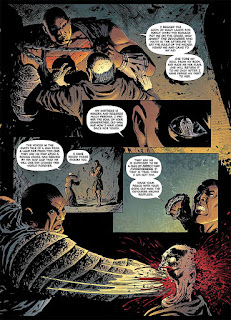 Do you like blood? Do you like dark fantasy? A fan of violence? Then guess what! This is the comic for you. It is seriously gore ridden tale, almost to the point of being over done. Our Hero(?) Aquila was once apart of Spartacus' failed rebellion and whilst he cried out at being crucified an angry god answered. In exchange for an immortal life Aquila now hunts down souls for his new master Ammit the Devourer.

During his adventures, we meet Romans, Celts and the founders of Christianity. A true highlight of the comic was the sidekick of Aquila, Felix Fortunatus. A complete coward and self absorbed character he plays well against Aquila and how he manages to survive the fighting is beyond me!

Lowlights of the comic for me has to be the main character Aquila. I found myself not caring, he isn't likeable or even interesting. Then there is magic, how come it exists? What made it exist, why are the gods so active.

It was definitely a fun read, not necessary one I would buy for my collection. It just over did the gore aspects for me, whilst not working on the plot or background. Would love to here your thoughts on this. As always drop me a comment and hit follow!
Posted by Adventures with Peps at January 14, 2020