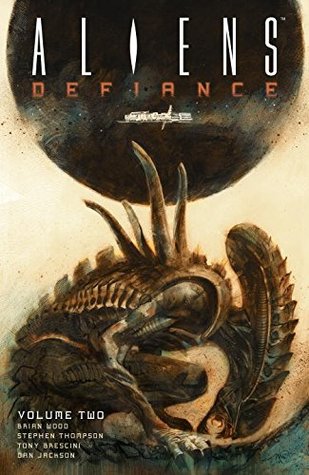 Coming in hot on the coat tails of our last comic review come Aliens: Defiance, Volume 2. If you haven't read last weeks review, do yourself a favour and go read it. I will be honest and say the last comic was pretty standard.
One strong woman lead, supported by an android fighting the xenomorph menace whilst trying to stay one step ahead of the evil Corporations. I am interested to see where the tales goes from here.

Commercial Fluff:
Colonial Marine Private First Class Zula Hendricks is on an AWOL mission to prove her mettle by eradicating the alien species before they can be exploited as weapons on Earth. She must battle with aliens, fend off space pirates, and elude the insidious Weyland-Yutani corporation that wants their freighter back, all while facing rehabilitation from an old war injury. 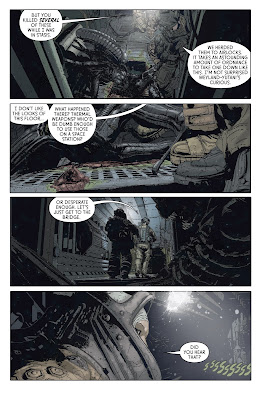 Well Aliens: Defiance, kind off drifted off to a slow end.

It's not that it has a bad ending in anyway. It just felt like a very organised, all the t's crossed and i's doted kind of finishing. With no real loose threads left behind, you aren't left wondering the meaning of the tale. Instead you are left feeling this is just a leading tale to a future script.

But hey, it's a xenomorph comic, it's not meant to be a tale for the ages. Instead you get a solid story, once again delivering a strong female character in the lead. Zulu continues to be an interesting heroine and Davis (the now freed android) continues to search for the meaning of his life and if he is able to function in a galaxy of caring humans. Personally I think Davis was the strongest character in series and I would have loved to have seen him with more page time.

But back to the story: nothing goes well for the trio, in classic Alienverse fashion the xenomorph's constantly mess things up and I do feel the final pages were rushed and led to a blunt ending and possibly not the ending I felt the story was heading to. Though the biggest peeve for me, was the changing of the artists between strips. It completely drew me out of the story and really affect my overall enjoyment of the series. In what to me seemed like a short strip to change artists four times, really annoys me, Dark Horse please stick to one artist please!

Ultimately you should read it if you are a fan of aliens, but just remember it's not going to blow your mind or change your view point on the franchise. What it will do is entertain you for the thirty minutes read. Leave me a comment below of your thoughts and then hit follow!
Posted by Adventures with Peps at January 07, 2020