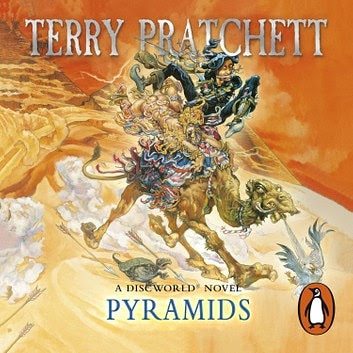 Following hot on the broom stick of Wyrd Sisters come Pyramids. You know you've read a good book when you find yourself diving straight into the next one without a moments pause! I really hope this one fairs as well as Wyrd Sisters. But enough chat lets jump in!

Commercial Fluff: t's bad enough being new on the job, but Teppic hasn't a clue as to what a pharaoh is supposed to do. After all, he's been trained at Ankh-Morpork's famed assassins' school, across the sea from the Kingdom of the Sun. First, there's the monumental task of building a suitable resting place for Dad -- a pyramid to end all pyramids. Then there are the myriad administrative duties, such as dealing with mad priests, sacred crocodiles, and marching mummies. And to top it all off, the adolescent pharaoh discovers deceit, betrayal - not to mention a headstrong handmaiden - at the heart of his realm.

Pyramids is lucky number 7 in the Discworld series, and I'm still enjoying them! This time Pratchett turns his humour to religion, faith and what loyalty is all about. Set in the desert kingdom of Djelibeybi aka Egypt. Where this tale differs from the others is that it is a stand alone adventure, no classic Discworld characters in this one. Giving Pratchett a bit of freedom to play around with what he is doing.

As a slight non believer, I enjoyed Pratchett's tongue-in-cheek view point on faith, his over the top attack on organised religions and the how stupid traditionalism is when it goes beyond what should be accepted in modern society. He also introduces the idea that camels are in fact amazing mathematicians and playing us dumb humans for fools!

Definitely not the strongest novel in the series but for sure a must read for Pratchett fans.
Posted by Adventures with Peps at January 17, 2020