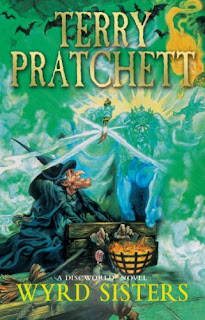 Wow it's been nearly seven months since my last adventure in Discworld (Link). But we are finally back, riding the great turtle all the way into book 6: Wyrd Sisters. Rather than hang around to be cursed by a witch lets jump into the details.

Commercial Fluff: Things like crowns had a troublesome effect on clever folks; it was best to leave all the reigning to the kind of people whose eyebrows met in the middle.

Three witches gathered on a lonely heath. A king cruelly murdered, his throne usurped by his ambitious cousin. A child heir and the crown of the kingdom, both missing…

Witches don't have these kind of dynastic problems themselves – in fact, they don’t have leaders. Granny Weatherwax was the most highly-regarded of the leaders they didn't have. But even she found that meddling in royal politics was a lot more complicated than certain playwrights would have you believe, particularly when the blood on your hands just won't wash off and you're facing a future with knives in it...

Such a good read, it is basically Macbeth given a Discworld twist. In this novel we see the return of Granny Weatherwax (from Equal Rites) and she is not alone. This time she has a coven, made up of Nanny Ogg (a local matriarch with a large family) and Magrat Garlick (newest witch to the country). These three seemingly make up the Witches of Macbeth representing the Crone, Mother and Maiden.

Through out the story Pratchett leans heavily into the realm of Shakespeare clearly referencing Hamlet, Macbeth and King Lear. Which is great to read and adds to the whole idea of an alternate universes. It is also nice to see the return of Death and of course the Unseen University's banana loving Librarian.

As I mentioned at the start this is a seriously good read. The humour is spot on for me and really brought a smile to my face as I read it. I can't recommend a better book in the series so far. Truly an A+ piece of writing. Do yourself a favour and go pick it up!
Posted by Adventures with Peps at January 10, 2020