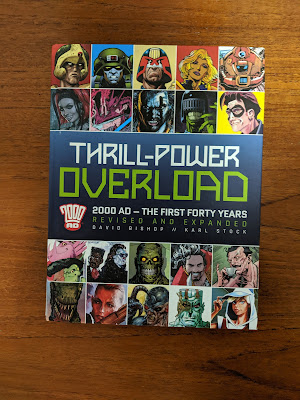 A bit of a different book review this week as I read Thrill Power Overload from 2000 AD a look at the history of my favourite comic and the creators of Judge Dredd. Here are the details:

Commercial Fluff: The definitive history of the most influential British comic ever!

From 2000 AD's humble and rocky beginnings to its current position as the Galaxy’s Greatest comic, Thrill-Power Overload charts the incredible history of this ground-breaking comic. With exclusive interviews, hundreds of illustrations and rarely-seen artwork, former 2000 AD editor, David Bishop and journalist Karl Stock, guide the reader through four decades of action, adventure, excitement and the occasional editorial nightmare!

Told by the people who were there, this is the definitive history of the comic that launched a thousand talents including legends such as John Wagner, Pat Mills, Alan Moore, Neil Gaiman, Carlos Ezquerra, Brian Bolland, Dave Gibbons, Mick McMahon, Grant Morrison, Kevin O'Neill, Simon Bisley and continues with 21st Century breakthrough talents such as Jock, Rob Williams, Andy Diggle, Al Ewing, Henry Flint, Frazer Irving - and many many more.

Unfiltered, uncensored, and with remarkable frankness, Thrill-Power Overload demonstrates how 2000 AD’s creators went on to change not only British comics, but also the American comic book industry and its multi-billion dollar movie franchises. 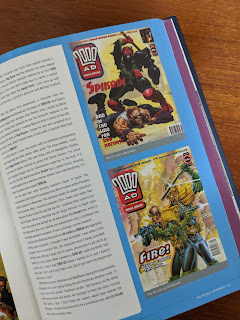 First up this is a weighty book. Printed in hardback and made in a size that fails to fit most standard bookcases this is a book to be feared! Charting the successes, failures and in-between stages of 2000 AD's life. If you are not a fan of 2000 AD (the shame) then I recommend skipping this book, though it is fun for a fan I am sure it would come across as dull to the uninterested. The true highlight of this book for me is the pretty pictures and the walk down memory lane.

We learn of the inception of the magazine and how it soon started absorbing other British comics into it's franchise. We also learn of some of the hard to believe rocky moments that could have lead to it's demise, before finally hitting the here and now of how it is going from strength to strength with the help of Rebellion Publishing. But as I mentioned it is the artwork in the book that steals the show as it showcases characters from across the 40 years and explains why they exist and in a lot of cases why they no longer exist.

This book is just jam packed full of interviews and quotes, from artists, designers, editors and fans of the comics. Which help to give some real character compared to say a DC history book. The interviewees are candid and honest, sometimes hilarious and sometimes painfully blunt on their opinions. It's interesting to read how the creative energy ebbed and waned throughout the years and how honest they are about it all it is truly a refreshing read.

As I mentioned at the start this is a piece for 2000 AD or comic book fans. But for me it was a peek behind the scenes of one my favourite comics and for me it changed my view point on the comic and made me appreciate the team behind it even more.

Have you read the piece? Drop me a comment and let me know or better yet follow me here or on instagram via the @adventureswithpeps. Thanks for reading.
Posted by Adventures with Peps at January 03, 2020