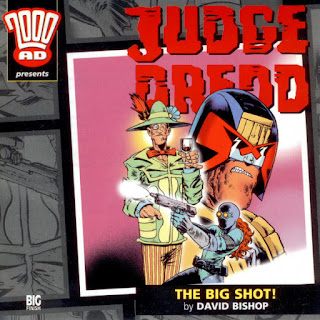 First audio book of 2020! Now Fridays are meant to be my novel review day, but every now and then an audio book will drop into the slot instead. This is because I am a slow reader by nature and a book could take me a week or two to get read and then another week to get blogged about. So these audio books can fill the void. These titles will mostly range from Judge Dredd to Warhammer to aliens to Terry Pratchett, so the themes will still be the same. These are easier for me to complete as well as I enjoy them on my walk to work and listen to them during work.

But enough about this scheduling, let's just dive into this review.

Commercial Fluff: For decades Brit Cit's Quentin Quail has been a legend among Tri-D film-makers. Reclusive, self-obsessed, a perfectionist - Quail is an award-winning auteur… and very probably one of the most annoying men alive. Now he is coming to Mega-City One for a retrospective of his work at the Museum of Post-Modern Art.

Reluctantly accepting his assignment as VIP bodyguard, Judge Dredd finds his diplomatic skills tested to the limit. While protecting Quail, Dredd and Judge Amy Steel must track down a shadowy assassin whose deadly intentions threaten to strike at the very heart of the Big Meg's Justice Department. But their task proves almost impossible when the target refuses to acknowledge the threat and it emerges that the assassin may have a hidden agenda.

The bullets are soon flying, and Judge Dredd must decide which way to shoot…

As always Big Finish kill it with another great audio tale. The script is truly something out of a 2000 AD strip. Judge Dredd is forced to be the bodyguard of one of the most annoying celebrities of the time, Quentin Quail. Lucky for Quail he has Dredd as it would seem a score of assassins are after him!

One standout of the tale for me, was Dredd and Quail's first meeting. Quail barely in MC-1 for a minute and Dredd wants to arrest him for lighting up a cigarette in a public space. This seems to be the running theme as Dredd is constantly reprimanding Quail and wondering why he got lumped with being the bodyguard.

Basically another hit. Great story, great action, great acting and no narrators A+

Posted by Adventures with Peps at January 31, 2020